Santa Claus waves to spectators at the parade in Downtown Newton, atop the Tower 804 ladder truck.

NEWTON – Though there was a chill in the air, the sun beamed down on Spring Street, and the holiday spirit warmed the hearts of those who enjoyed the annual Holiday Parade in Downtown Newton on Sat., Nov. 30.

The parade takes place every year, the Saturday following Thanksgiving, and is hosted by the Greater Newton Chamber of Commerce (GNCC).

Newton’s Town Crier, Bill Joseph, rang his bell along Spring Street to spread the word that the parade was on its way. The parade proceeded on Spring Street, before heading down to its final destination at Memory Park.

The parade kicked off at 10 a.m., with Town of Newton Police Chief, Michael Richards, in the lead in his vehicle, followed by a New Jersey State Police Officer horseback. 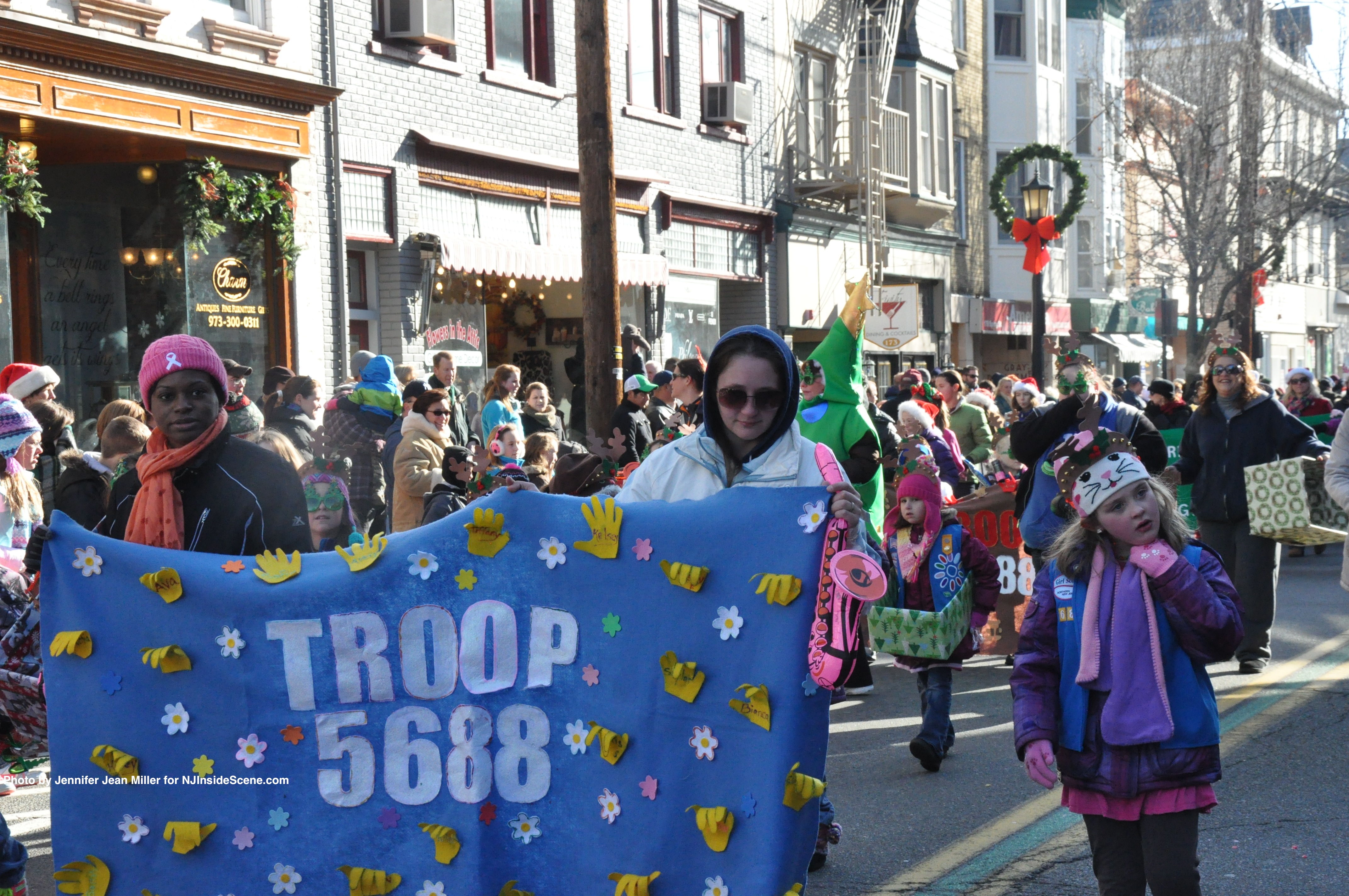 A sea of Girl Scouts make their way through Spring Street. 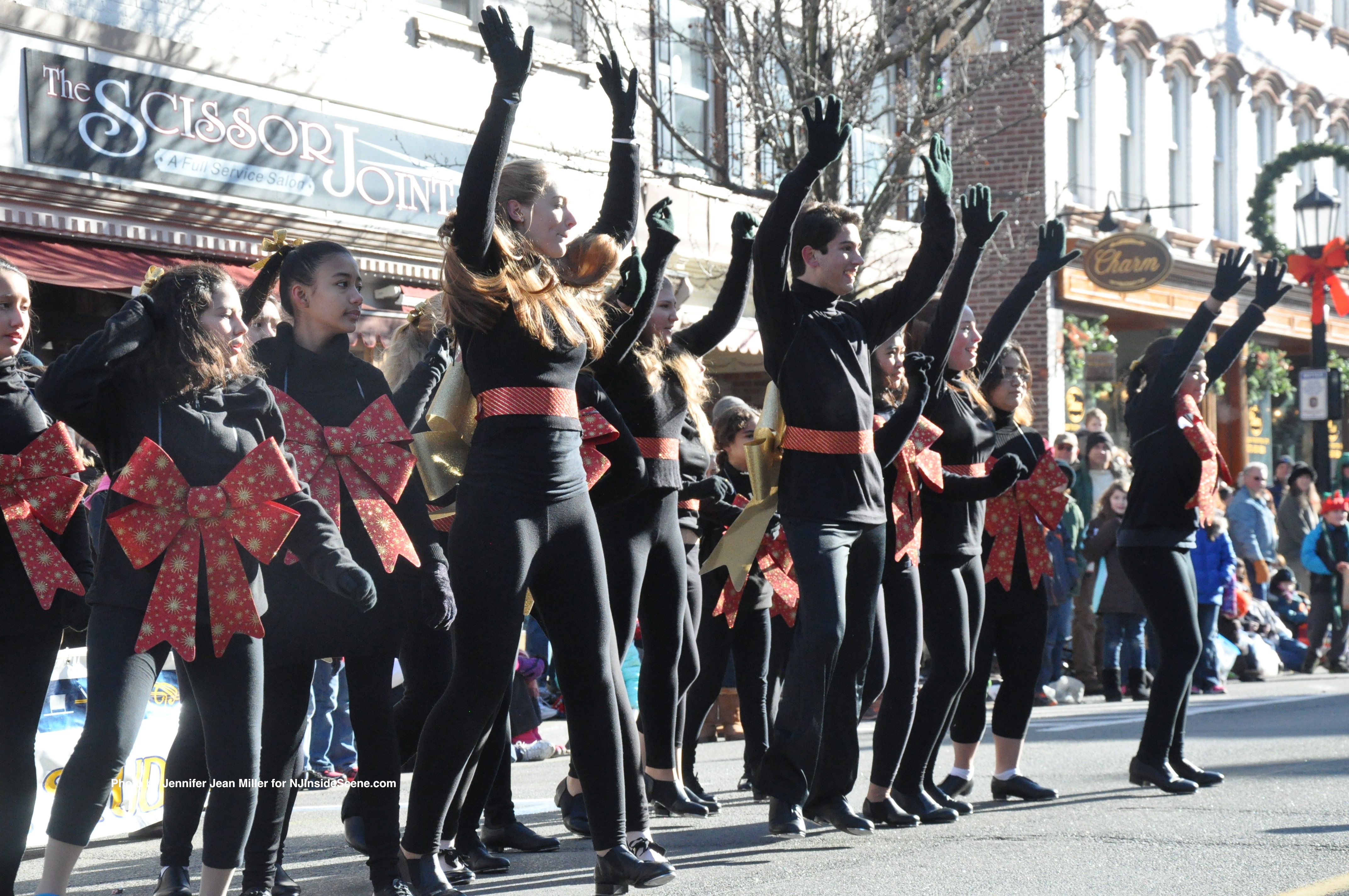 Dancers from D’Marge Dance Studio perform for spectators on both sides of the street.

Students from D’Marge Dance Studio in Newton made their annual appearance in the parade, tapping their feet all the way along Spring Street as they marched, making a stop in front of the Springboard Shoppes for a dance number, that elicited cheers from the crowd that lined both sides of the street.

Members of the Christ Community Church worship team also performed aboard a float, and made their stop by the Springboard Shoppes. 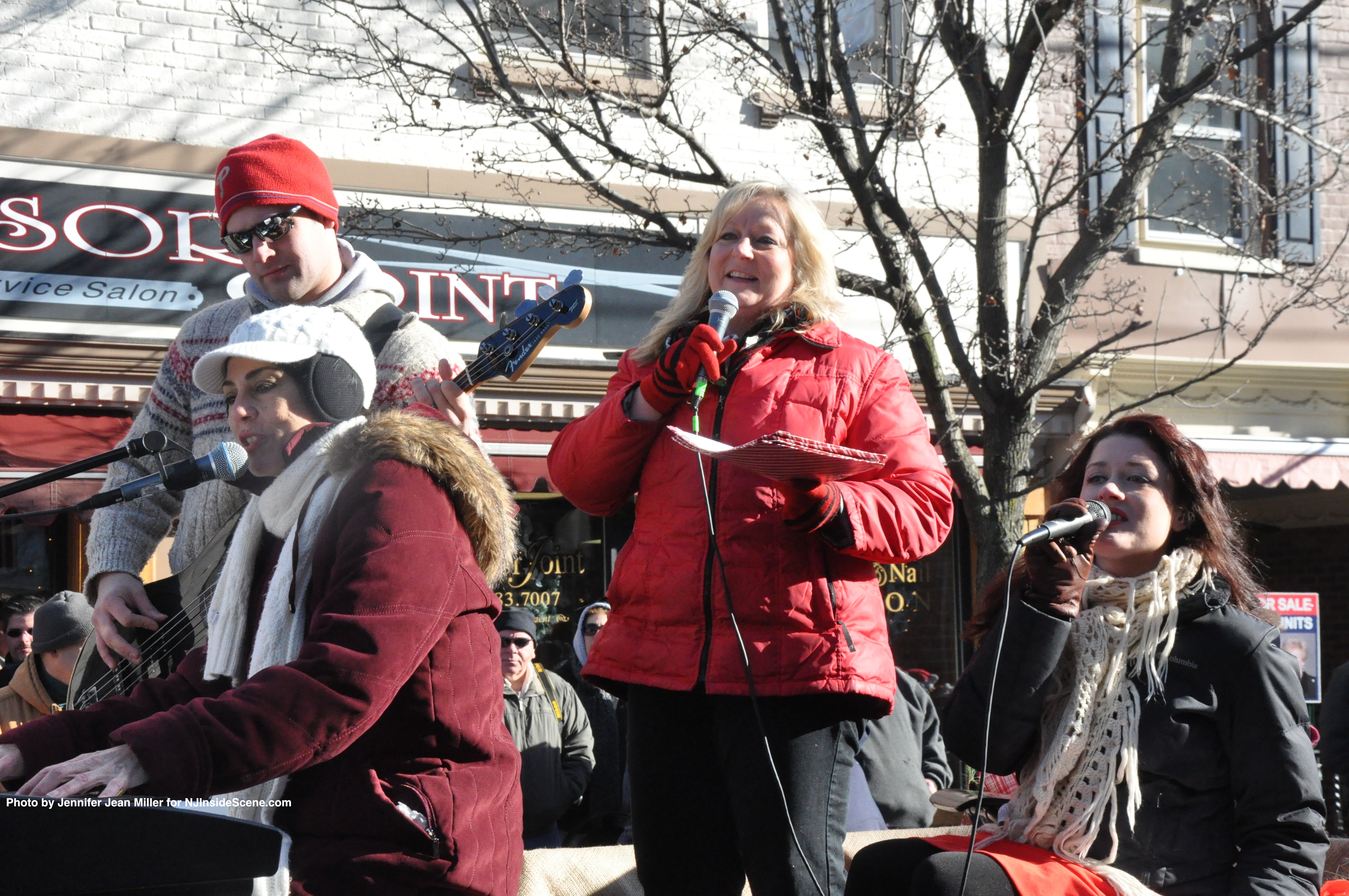 Members of the Christ Community Church Worship Team perform from their float.

Mark Hontz, an attorney in Downtown Newton, was the enthusiastic emcee, as he is normally for the parades, and led the parade spectators in song.

On four legs, there were dogs, goats, alpacas and more creatures, that trotted along with parade participants. 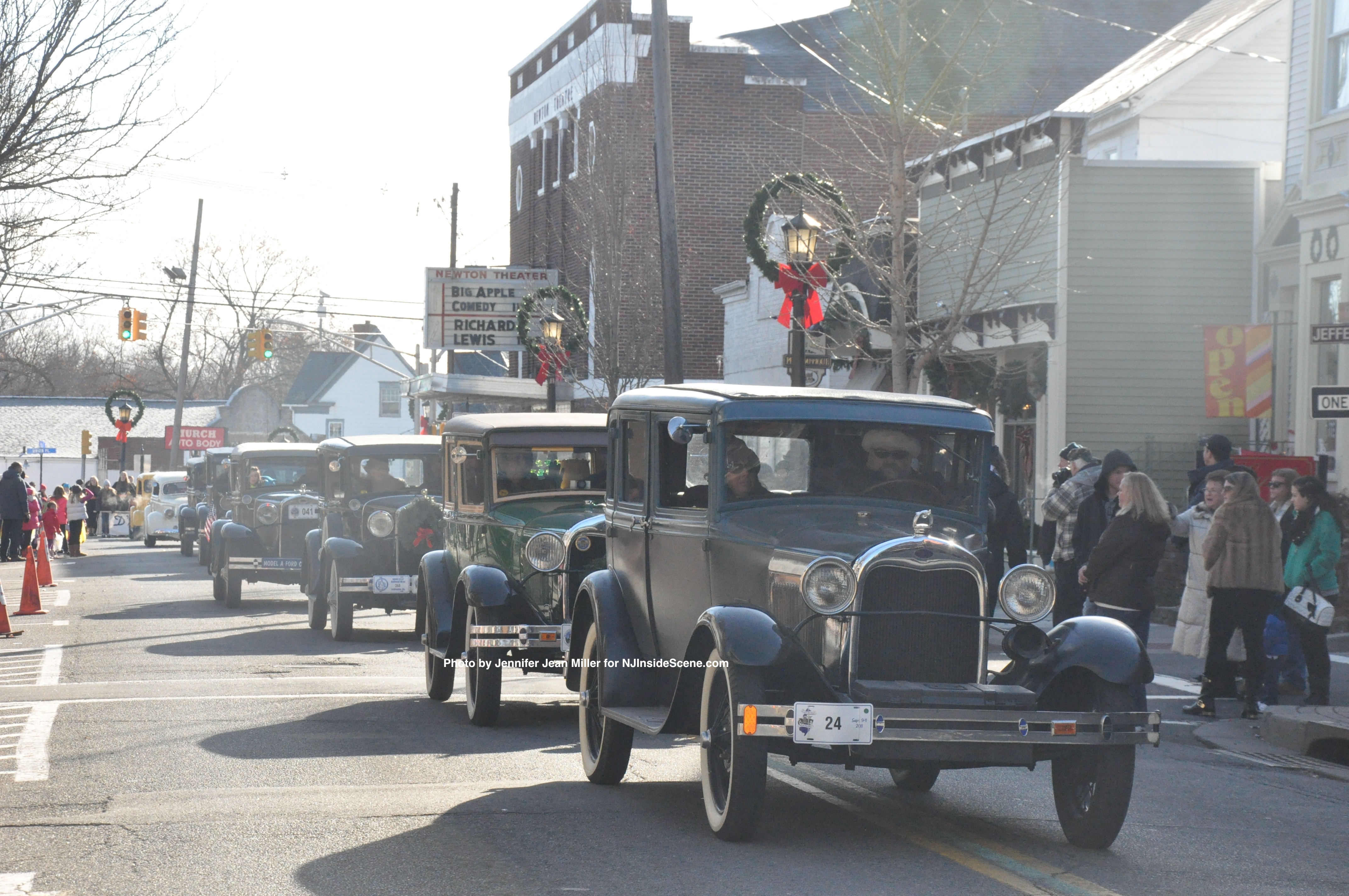 On four wheels were a steady of stream of antique cars, their “ooga” horns tooting their along the parade route. Fire trucks were other vehicles on four wheels that made their marks in the parade, with their sirens blaring along Spring Street, a few of them piping Christmas Music from their speakers. Some departments represented included: Andover Borough, Andover Township, Fredon Township, Hampton Township, and the Town of Newton.

The Newton Fire Department’s 1948 Mack preceded the guest of honor, as it made its way past its former (when it was in service in town) and newly reunited home on Spring Street, the former firehouse, now the Newton Fire Museum. Next, the Franklin Band geared up with “Jingle Bells,” as Santa Claus was chauffeured along Spring Street, waving to spectators from side to side, atop Newton Tower 804, the town’s ladder truck.

After one more pass, Santa Claus made his stop on Spring Street in front of the Newton Fire Museum, for children to sit on his lap and meet him, pose for pictures, and to share with him their wishes for Christmas. 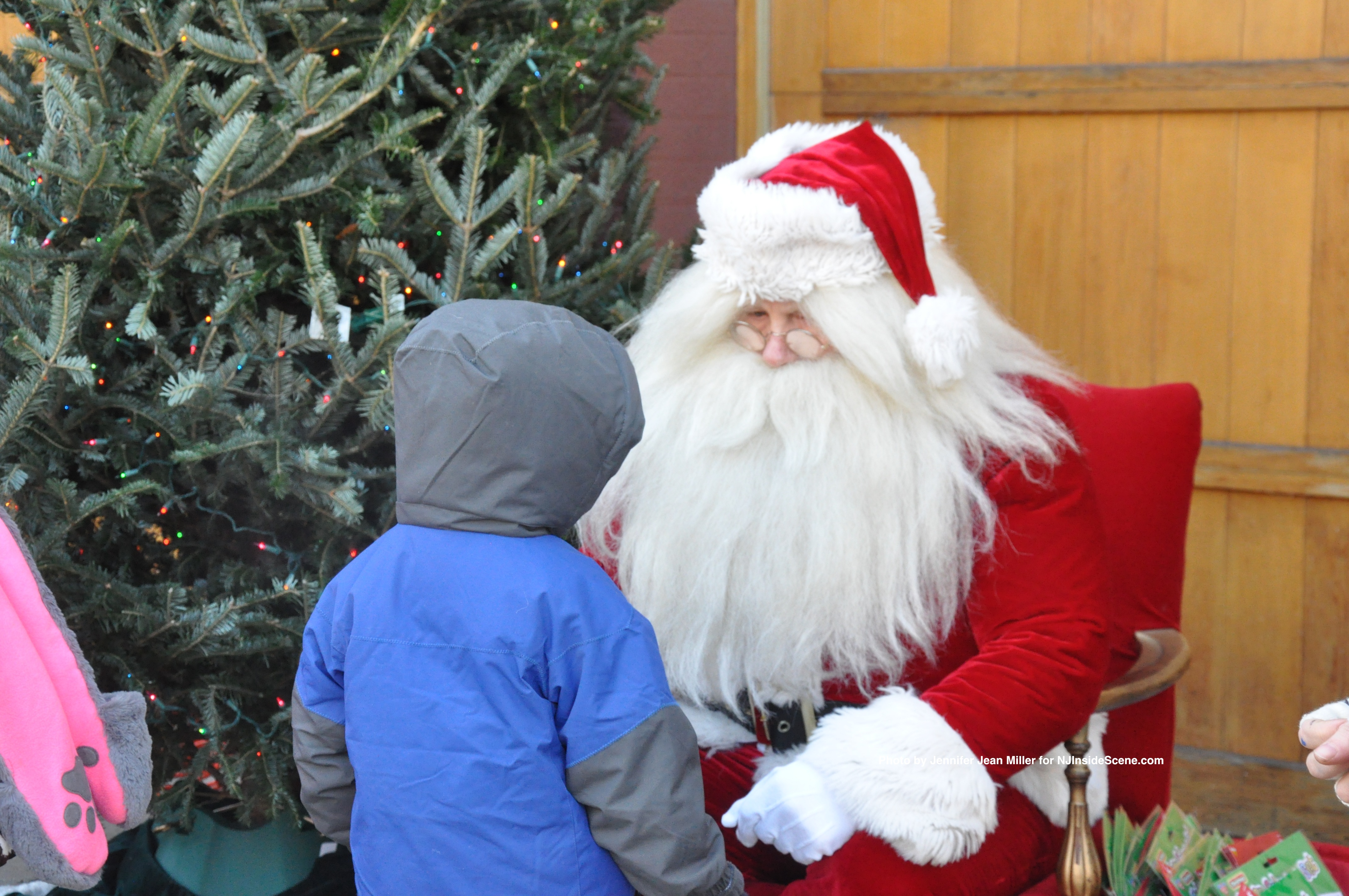 Following the parade, spectators made their way to the various shops and restaurants in Downtown Newton, as well as the Newton Winter Farmers’ Market (click here for our story about the market).

One of the exciting happenings in Downtown Newton through Dec. 21, is the “Window Wonderland” contest on Spring Street. Those who shop downtown through that date, are eligible to enter in for a grand prize drawing of gifts valued more than $250, by voting for their favorite holiday window display. Guests to Newton who shop in one of the Downtown Newton Stores who would like to vote simply need to vote in any store with a red ribbon on the door. No purchase is necessary. The winner will be drawn on Sat., Dec. 21 at 5 p.m. at the Springboard Shoppes at a special event with live music and refreshments.

To quote the town’s slogan, “There’s so much to do in Newton…so come walk around downtown.”

Editor’s Note: NJInsideScene.com would like to give special thanks to the Town of Newton Police Department and DPW, for their efforts before, during and after the parade…they are unsung heroes who help the town all the time, and do so much on a busy day like this.