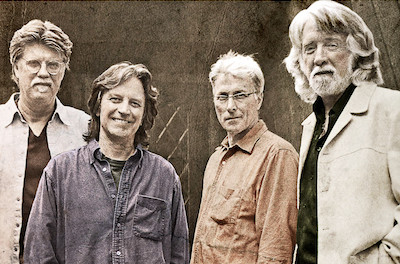 Celebrating their Golden Anniversary together, the iconic and profoundly influential Nitty Gritty Dirt Band, often cited as a catalyst for an entire movement in Country Rock and American Roots Music, solidifying their legendary status.

With multi-platinum and gold records, strings of top ten hits such as Fishin’ In The Dark and Mr. Bojangles, multiple Grammy, IBMA, CMA Awards and nominations, the band’s accolades continue to accumulate.  Their groundbreaking “Will The Circle Be Unbroken” album has been inducted into the U.S. Library of Congress as well as the Grammy Hall of Fame. NGDB’s recording of Mr. Bojangles was also inducted into the Grammy Hall of Fame in 2010. In 2014 Fishin’ In the Dark was certified platinum for digital downloads by the RIAA.

Today, NGDB (Jeff Hanna, Jimmie Fadden, Bob Carpenter, John McEuen) continue their non-stop touring in their 50th year together. Recent tour stops included Stagecoach, Hardly Strictly Bluegrass Festival and many more. The plans for their 50th Anniversary are extensive! They played to a sold out crowd at The Historic Ryman Auditorium with some close friends to film a 50th Anniversary Special to air on PBS starting this March!