A fall assortment from Lockwood Farms was one of the silent auction items those in attendance could bid on.

BYRAM – Food, wine, ale, art, and good company were in abundance on Thursday night, as was the crowd, as hundreds turned out for the third annual and sold out Harvest Moon Festival to benefit Waterloo Village.

Hosted by the Friends of Waterloo Village, a non-profit group with the mission to preserve and revitalize the historic village, local restaurants, such as SALT Gastropub, the Black Forest Inn, and Bell’s Mansion, served up a variety of delectable fare, which attendees could complement with wine or ale of their choice.

Guinness braised sliders, pheasant pork Grand Marnier Maultaschen, and buffalo chicken and potato pierogies, were a few of some of the treats that guests could sink their teeth into. After some of those entrée portions, there were also samplings of artisanal cheeses, plus decadent desserts, including cake, pastries, and Cliff’s Ice Cream, to finish off the evening. 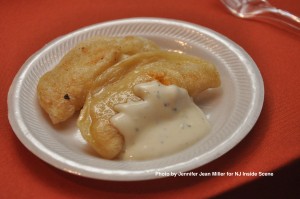 A cheese and buffalo chicken pierogie ready to be enjoyed.

“It’s a good representation of all the local restaurants,” said Jessica Curran of Hopatcong, who attended with Dan Gnagey. 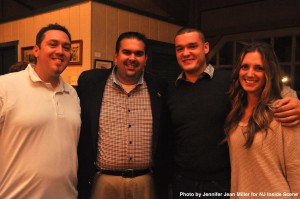 From left to right: Giovanni Di Meo, Carlos Luaces, Dan Gnagey, and Jessica Curran, stopped for a smile in the midst of the festivities.

Gnagey, who grew up in Byram, and for whom Waterloo Village had been a part of his life during his childhood years, said he was invited to attend by Friends of Waterloo Chairwoman, Randi Frumolt.

“I came here for field trips growing up,” Gnagey said. “She [Frumolt] told me about it [the event] and I said, ‘Why not?’”

“We are working very hard to restore this village,” Frumolt explained to the crowd, “and we owe a lot to you guys here tonight. Thank you very much for coming. We appreciate everything you’ve done and the efforts. And we’re going to continue to restore this great place that I used to come when I was in fourth grade, to get my long taffy at the General Store,” Frumolt concluded with a smile, recalling her childhood memory of Waterloo Village. 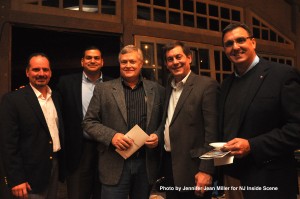 “We’re all here for a different reason,” said George Graham, who is a member of the Friends of Waterloo Board of Trustees.

Graham informally polled the audience for their motivation for attendance.

“How many people in this room came here maybe on a class trip when you were young?” he asked. 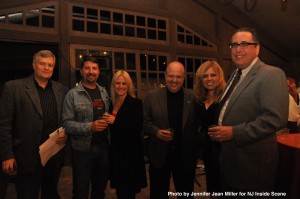 Many raised their hands.

More hands were raised, and others let out cheers.

“We really did accomplish something here, with replacing some of the roofs, the Grist Mill roof and the Smith store roof,” Graham continued.

“In your program, there are three photographs of the Mule bridge,” Graham added, “that is not a coincidence. There’s a reason for that. On the other side of the Musconetcong River is the other half of Waterloo. That’s where the incline plane was. That’s our job, as Friends of Waterloo Village, is to try and restore the Village. And that’s the other part of the Village.”

There were items up for auction in the silent auction, including New Jersey Devils Tickets, tickets for Newsies, a NASCAR basket, various pieces of artwork, an intricate quilt, and more. 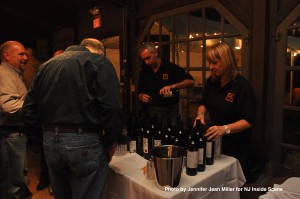 Guests, including Byram Mayor Jim Oscovitch, stopped by to sample some wine.

The Friends of Waterloo Village helps to secure funding to assist in restoring buildings and structures in the village, which is a district listed on the New Jersey and National Register of Historic Places. After having been managed by a private foundation, the New Jersey Department of Environmental Protection (NJDEP), Division of Parks and Forestry, began overseeing the village in 2007. The NJDEP has donated over $600,000 to the restoration of the village.  The Friends of Waterloo Village have picked up in the efforts where the funding has left off.