Members of the Sussex County Community College Board of Trustees discuss the new ethics policy. Photo by Jennifer Jean Miller.

The members of the board voted affirmatively on the measure to revise the ethics policy, which will includes guidelines such as board members requiring to disclose conflicts prior to discussing and voting on matters, and the ability for other trustees to bring up potential conflicts they may know of about other board members. Review of the policy will also take place annually. Exceptions can be granted and the ethics committee will have the final say on granting the exceptions.

Dr. Paul Mazur, the college president, encouraged members of the board to vote in favor of the revised ethics policy. Mazur said that the policy the board had previously utilized was implemented at 15 of the 19 community colleges throughout the state. The board’s chair, Judge Lorraine Parker, said that two community colleges, Hudson and Middlesex, had no ethics policy in place.

Parker reiterated how seriously the college has taken the topic of ethics, including taking the proper steps to aggressively address ethics, as well as send the Saiber Report with the firm’s recommendations, to the state’s Office of The Attorney General.

“This policy goes beyond that which is the model,” said Mazur, who added that the Middle States Commission on Higher Education would need a report on a more comprehensive policy as quickly as possible.

The board member with questions on the revised ethics policy, and suggesting it not go forward on Monday evening and perhaps stay as a first reading that night, was Daniel Perez. who offered that the ethics policy might require more clarification about the material financial interest clause and that financial interest can sometimes be relative. He suggested that other groups might like to review it before it is officially adopted. Click on video within this article for some of Perez’s remarks.

Though he initially agreed it should be adopted, Perez recanted slightly and added, “I’m just wondering if maybe we want to pose this as a first reading tonight, and solicit the input of other folks who haven’t seen this yet. I’d be interested, the faculty to their credit offered back in July, to help. And there’s a lot of folks on our faculty who I think deal with ethical issues on a regular basis. I’d be interested to hear their input. Frankly, I’d be interested to have the students take a look at this as well, because the folks that this most directly influences is the faculty and students.”

After the construction at the college was delayed due to the ethics questions raised, the general contractor, Echelon, granted an extension of its contract to the college, which the college approved to agree to the contract’s extension to October 19. On Wednesday, September 24, the Board of School Estimate voted unanimously to transfer funds in the amount of $726,000 for the Building D Echelon portion of the project, which had been previously been earmarked from the state’s Go Bond, for refurbishments in Building B.

Another two orders of business that the board of trustees voted on during the September 22 meeting, focused on the Building D Project and to accept CP Engineers proposals from March and December 2013. All members of the board voted “Yes” to both, except for Perez abstaining on the first, and Perez and Dr. Rosalie Lamonte both abstaining on the second.

Hank Pomerantz, adjunct professor and president of the Adjunct Faculty Union, praised the board during the second public session on the new ethics policy and questioned why there was no reason given for the abstentions, because of contingencies in the new policy, which seek a reason behind abstained votes.

“You did a great job on the ethics,” said Pomerantz. “I think if we had all of that with us, the table wouldn’t be as empty as it is today. Good people did good things for this place, and I miss them in all honesty.”

“Not unless it’s a conflict of interest,” Parker replied. “That’s why we’re distinguishing between abstaining and recusing.”

Pomerantz said he would acquire a copy of the new policy and will read it more diligently, and continued with, “Again, I wonder why that’s not something that’s required, I know it is in some circles where you say, ‘I wasn’t available for that meeting, and that’s my reason for abstention.’”

Parker said it may be advisable, but it is not required under Robert’s Rules.

A party who expressed his upset in both the first and second public participation sessions was Harry Dunleavy, a regular attendee at the meetings. Dunleavy was angered during the first public session because he said he had requested by OPRA a contract about Mazur’s salary and his request was rejected. A personnel action that was taken on Monday night, and approved, was regarding Mazur’s contract. Board counsel Katherine A. Gilfillan explained to Dunleavy that the document regarding Mazur’s salary was not an open record at the point he requested it, because it was still a negotiated document. Negotiated documents, Gilfillan said, were not public record.

Mazur’s salary was slated for approval on Monday with an increase, with the total base salary at $171,899 and the standard benefits package.

Dunleavy, in both the first and second public sessions, expressed his disdain for Mazur, Parker, and trustee Ed Leppert, who was absent from the meeting, and said that he hoped they would resign.

Dunleavy lauded one local newspaper for “giving the public information while this board was asleep.”

“I am glad to say that the President of the Board [Glenn Gavan] is gone, I was hoping he would retire,” Dunleavy added. “I was hoping Dr. Mazur would retire. And Mr. Leppert should have to retire, and I think it should be looked into.”

Dunleavy additionally criticized the Saiber report, accusing the attorney who conducted the investigation of doing a “very eloquent job, obviating the responsibilities of the board, who were asleep when all of this was happening, and now the public will be paying thousands and thousands of dollars, for all of that advice that he was giving to cover up for you people.”

He also said that he wished the CP Engineers matter was “forgotten forever,” and that he thought there was a “total mess made” that was “costing the public an awful lot of money,” and he said that he thought, “a lot of you should have been ashamed of yourselves,” referring to the board.

Parker thanked Dunleavy for his comments.

The Saiber Report showed that the college handled all matters appropriately with the bidding process for Echelon and the Building D project, as written in the previous article by NJ Inside Scene (click here to read), and that the ethics policy, which the Saiber Law Firm stated caused “some confusion and lack of knowledge as to what the obligations were,” was reviewed and strengthened with the newly adopted policy. Additionally, CP Engineers’ proposals, which were analyzed separately (click here to review the report), were described by an outside analyst from Construction Claims Group (CCG) Russell E. Berner, as “proper and that the quotation falls within the range of costs that I would expect an engineer in the industry would charge for the same work. If anything, the proposals are slightly low in cost than would be provided by other firms.”

Dunleavy further stated his opinion that students in the county are heading to the next county to attend community college, and “instead of stating how great things are, I think we need to realize that there’s been a bit of a mess that’s been going on here, for quite a while.”

Kevin Duffy, an alumni and non-voting member of the board of trustees countered Dunleavy’s comments about the college, as well as Dunleavy’s commentary about the paper. During the meeting, Parker read a number of letters written to the school by alumni and former students about their positive experiences with Sussex County Community College, which she said are often not reported in the papers. Duffy also said he had submitted positive news about student happenings to the paper, which were never published.

Duffy additionally shared an anecdote about a career development course hosted at the Morris County Prosecutor’s Office, with many colleges, including Sussex County Community College participating. Duffy reported that other colleges have stated “how awesome our two professors are,” referring to the professors who participate in the course.

Duffy turned to Dunleavy about the topic of the college and why students might go to other colleges is that they “don’t realize what they can get here. I didn’t realize it at first.”

Duffy identified himself as from Vernon and a Sussex County Technical School graduate, and that some might wish to get rid of the “high school atmosphere,” with not attending the same college that fellow high school graduates may attend. Duffy said he “loves this college.”

Dunleavy stated his desire to reply to Duffy’s comments and both trustee Rachel Geraci and Parker advised him he had already used his allotted time to speak. 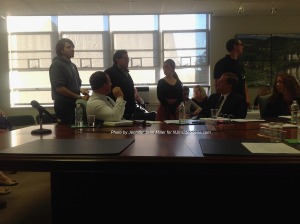 Members of Sussex County Community College’s Student Government share about the “Mission Possible” program and other events that are upcoming. Photo by Jennifer Jean Miller.