NEWTON – The Town of Newton celebrated its annual reorganization meeting, with the swearing in of two councilmen, the appointment of a new mayor and deputy mayor, and a special award that its town manager recently received.

The town recognizes its annual reorganization on the first of July annually, with the 2014 reorg taking place on Tuesday night, July 1.

Two councilmen were sworn in, incumbent E. Kevin Elvidge, and new councilman Wayne Levante. Elvidge began his term of service in 1998, and Levante was newly elected in June.

Levante takes over the seat vacated by Joseph Ricciardo, who has officially retired from the council, after beginning his service in 2001. Ricciardo has just concluded his service as the town’s mayor, having served in the position previously.

The event kicked off with an invocation by Pastor Bob Meeker of Christian Faith Fellowship Church. Meeker also performed the benediction at the conclusion of the reorg event.

Kevin Kelly Esq, conducted the swearing in for Elvidge, as Judy Foster held the Bible. Elvidge was sworn in twice – once as a councilman, and next as the town’s new mayor. He had just served as deputy mayor in 2013. Elvidge has served as mayor a number of times previously.

Kelly returned for the swearing in of councilman Daniel Flynn as deputy mayor. Flynn has served as a councilman since 2012. Erin Dougherty held the Bible for Flynn. 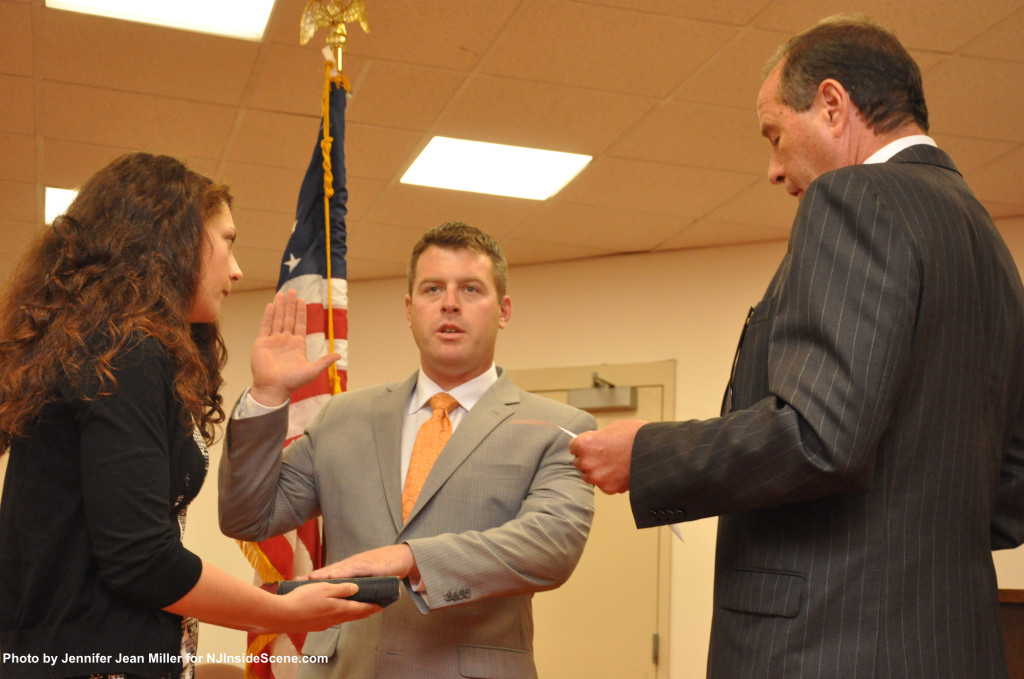 Erin Dougherty holds the Bible for Daniel Flynn as Kevin Kelly swears him in for the role of Deputy Mayor. Photo by Jennifer Jean Miller.

Town of Newton Town Manager Thomas S. Russo, Jr., shared his remarks, and offered how he looked forward to working with the council again, and welcomed Levante. He also announced his receipt of an award on Friday, June 27. He received the Distinctive Leadership Award from the Sussex County Economic Development Partnership.

“The recognition really goes to my staff, department heads, and volunteers,” Russo said.

Russo also announced it would be the final reorganization in the council room as it will be refurbished with new carpeting and chairs over the summer.

Council members in attendance, including Elvidge, Levante, Flynn, and Kristen Becker (Sandra Diglio was absent from the meeting), made closing remarks about the outcome of the year overall, and also welcomed Levante.

“I’d like to give a special thanks to Mr. Wayne Levante,” said Elvidge. “You ran a great campaign and I’m excited to work with you.”

Elvidge said he was impressed with how quickly Levante was adapting to his role as councilman, and especially how he was looking at Special Improvement Districts, including making trips to Red Bank, NJ.

“I think the energy will be tremendous what you bring to the council,” Elvidge said.