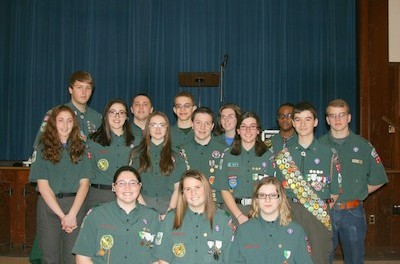 SUSSEX COUNTY, NJ – Recently, Venturing Crew 276 hosted their first annual Court of Honor. That evening, Venturing Crew 276 honored its members who had completed the requirements for recognition in various programs offered in Venturing. This Court of Honor was unusual in its scope. Forgoing the opportunity to have individual ceremonies, the Crew unanimously decided to receive all honors together that night, acknowledging the importance of the support they received from fellow members, while meeting their own individual goals and requirements.

In 2014, Venturing underwent some changes; one of the major changes that were implemented was the new advancement program. The Venturing awards and recognitions programs are designed to help Venturers grow in the areas of adventure, leadership, personal development, and service. Awards serve as benchmarks that give Venturers a structure for developing their own personal vision into manageable goals that lead to recognition by their peers, mentors, and the larger community. The new Venturing award program has four levels: the Venturing Award, the Discovery Award, the Pathfinder Award, and the Summit Award.

At the time of the Court of Honor, Crew 276 presented its members who had earned awards under the old advancement program for the final time. The awards in the old advancement program could only be earned up until December 31, 2014, and many crew members had worked hard to achieve these awards by that deadline. Many succeeded, and all were happy with their progress. This advancement program had five separate Bronze Awards, each with a focus in a different area. At least one Bronze Award had to be earned before the Gold Award. The Gold Award had to be earned before the highest recognition in Venturing, the Venturing Silver Award which is equivalent to the Boy Scout Eagle Rank and Girl Scout Gold Award. The order seems somewhat reversed today, first gold, then silver. But when the program was established, silver was more precious than gold. 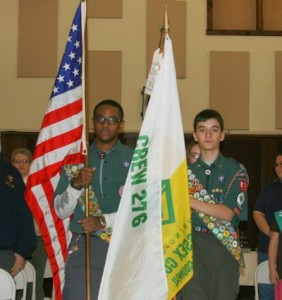 Venturing developed the Bronze Award to address the wide variety of interests. Venturers could earn a medal in one or more of the five categories: Sports, Religious Life, Arts and Hobbies, Outdoor, and Sea Scouts. The requirements for each of the Awards varies from developing a set of training rules for a sport in the Sports Award, to planning and leading a service project such as helping build a home for the poor in the Religious Life Award, or becoming proficient in areas such as first aid, wilderness survival, and land navigation, for the Outdoor Award.

To earn the Gold Award, Venturers must participate in a district, council, area, region or National Venturing event. They realize benefits that they have gained from their training for leadership and for service. Venturers rush on, working, serving, and leading. And as they go, they set one personal growth goal related to each of the following areas: citizenship, leadership, service to others, community/family, outdoor experience, and total fitness. They must plan, prepare for, and lead to completion two crew activity projects.

Being prepared has always been one of the key tenets of Scouting. Venturing Silver Award Recipients must be prepared to take care of themselves as well as be ready to serve others when called. They must earn Standard First Aid and CPR certification, and to know and use BSA Safe Swim Defense. Leadership is one cornerstone of the Venturing Silver Award. They concentrate on developing leadership skills, and implementing those skills as a leader. They successfully completed the Introduction to Leadership Skills for Crews (ILSC).

Another cornerstone of the Venturing Silver Award is learning through experience. Experience can be a powerful learning tool. They have many experiences interacting with their peers and learning decision-making skills. They participated in the Ethics in Action program including Ethical Controversies, and an Ethics Forum. As they go about these tasks, they are busy giving leadership to other Venturing Scouts. They are continually giving service to those who cannot enjoy the trail, but need a helping hand. Only those crew members with real persistence and courage are able to gain the thrill of the Silver Summit.

Service to others has been the heart and soul of Scouting since William Boyce met up with the Unknown Scout in the London fog. The community service committee of the Patriots’ Path Council has established a whole new service awards program called Scouting Excellence – Recognizing Volunteerism, the SERV Award, which recognizes all participants in council programs each year for their hours of public service performed as a Scout. There are three levels, Bronze, for 8 hours of service; Silver, for 12 hours of service; and Gold, for 20 hours of service.

The following members of Crew 276 earned a SERV award in the 2014 year:

When a youth becomes a Scout, there is instilled within them something that we call the spirit of Scouting. The lit candle that night at the Court of Honor represented that spirit. Because the spirit of Scouting embodies the principles of the Scout Oath and Law, it is a shining beacon of inspiration. Alone, this light may seem feeble, but when multiplied by more than three million youth in Scouting, it becomes very powerful indeed. All the Scouts at the Venturing Crew 276 Court of Honor exemplify the meaning of Scouting, whether or not they chose to work for and earn the awards. The Crew has a great group of youth who truly know and show what it means to be a Scout. It is an honor for me to be among individuals that embody the Scout Oath and Law in their everyday life.