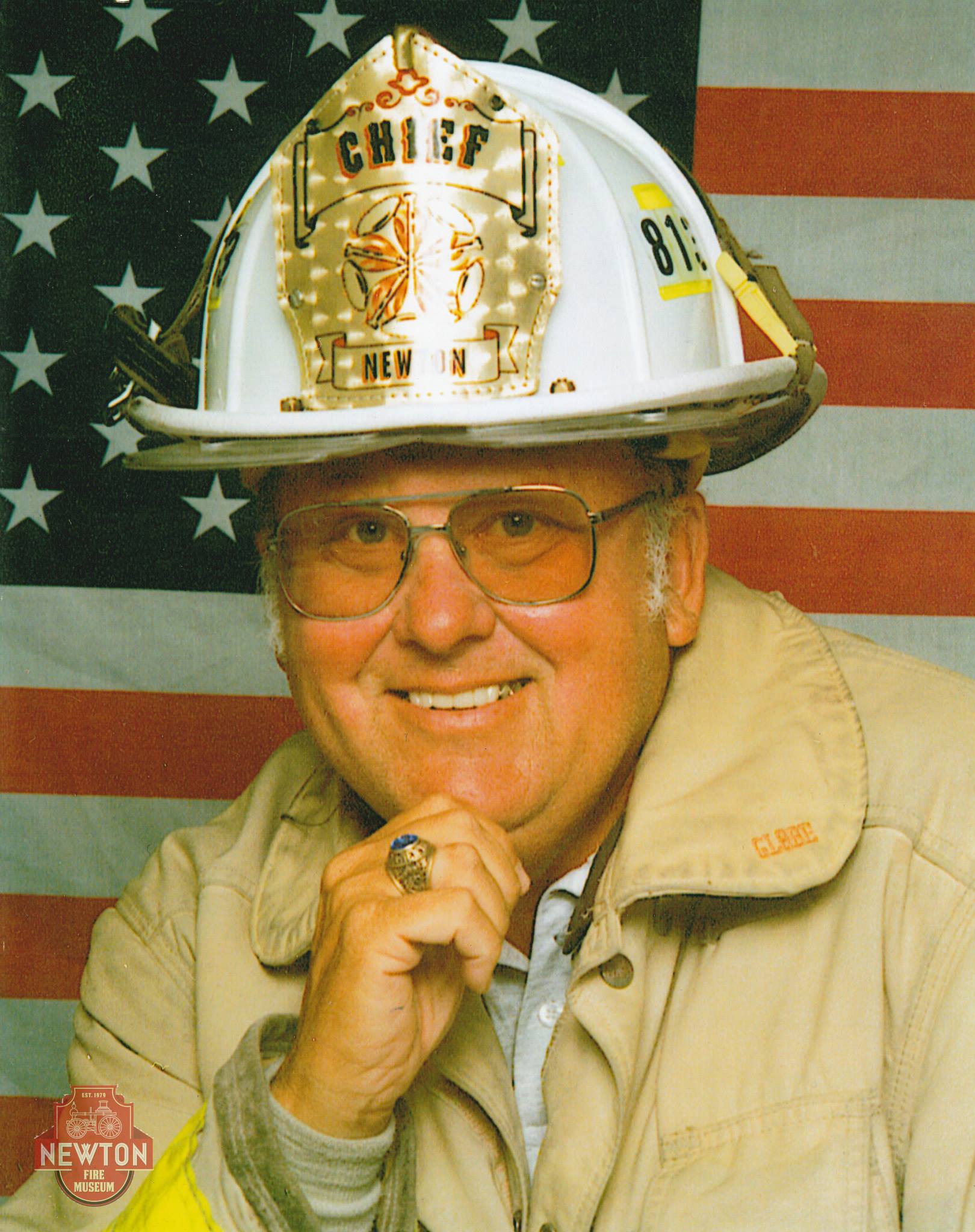 NEWTON – Former Newton Fire Chief, Chief Inspector of the Town of Newton’s Fire Prevention Bureau, and Sussex County Fire Marshal, Charles Arthur Thom III, known most fondly by those who knew him as “Charlie,” was laid to rest today, Dec. 3, in the Newton Cemetery, following a service at the St. Joseph R.C. Church in Newton.

Thom passed away on Thurs., Nov. 21 at age 73, at his home in Newton. He was born in the town, and was a lifetime resident.

St. Joseph’s Parish was filled to capacity with family, friends, and firefighters, traveling in from distances such as Hunterdon County. The afternoon and night prior, many more gathered for visitation and the Fireman’s Service at the First Presbyterian Church of Newton. Smith-McCracken Funeral Home coordinated the arrangements.

Monsignor Martin McDonnell, from the Good Shepherd Roman Catholic Church in Andover Borough, gave the homily at the church, and cemetery. McDonnell admitted to the family, “I didn’t know your Dad or Grandfather, I read his obituary, and was impressed. He loved his God, family, and community.” 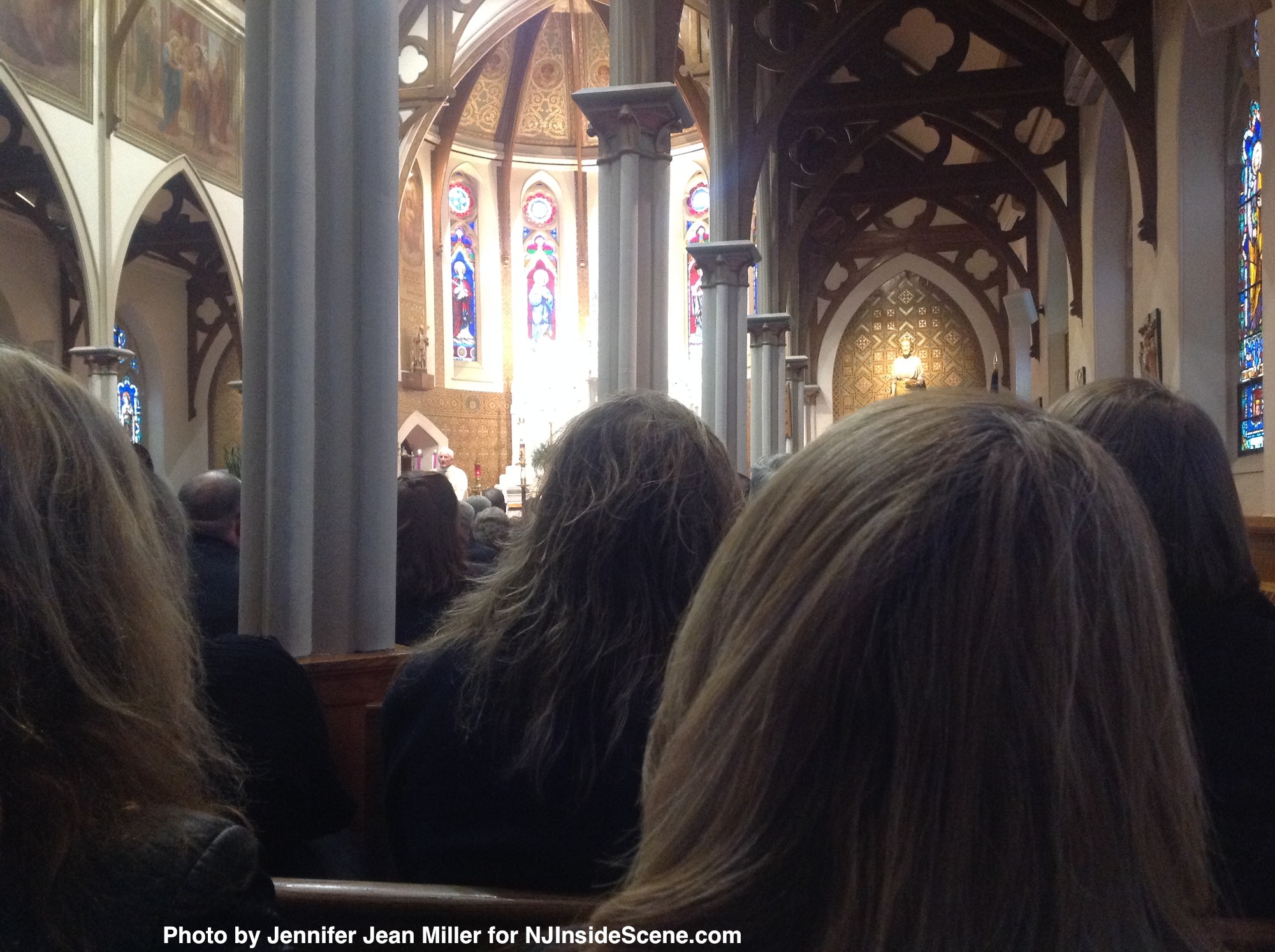 The service at St. Joseph Parish.

Thom was a devoted family member to his wife, children, stepchildren, grandchildren, step grandchildren, and sister. To many on the fire department who knew him, his daughter Charlotte Thom-Crawford expressed when she eulogized her father, firefighters looked to Thom as a mentor –- some placing him at the same level as a father.

In terms of his vocation, Thom was an entomologist for the Department of Agriculture for 31 years, and held a massive list of accolades in firefighting. He served on the Kittatinny Hose & Ladder Co. 1, as captain and lieutenant, and the Newton Fire Department from 1961 through 2013. He was the department’s chief from 1979 to 1982, and then from 1997 to 2002.

For 21 years he was the Sussex County Fire Marshal, and also served for 26 years as the Chief Inspector for the Fire Prevention Bureau for the Town of Newton. He was the Fire Sub-Code official for Newton, Branchville, Hamburg, Franklin, Fredon, and Mt. Arlington Township, prior to his retirement.

Thom’s daughter said her father was extremely involved in attending sports events faithfully for she and her siblings during their youth. Thom served as a member of the New Jersey State High School Wrestling Officials Association from 1960 to 1994.

A few of his other honors included: Citizen of the Year from Newton VFW Post 5360 Fireman of the Year by Don Bosco Council 7784, Knights of Columbus in 1982.

McDonnell elicited chuckles during the homily, when he joked that if Thom took a wrong turn on his way to heaven, “I have a feeling the fire’s already out,” then reiterated, “He’s [Thom’s] in the right place. We know he was a Godly man.” 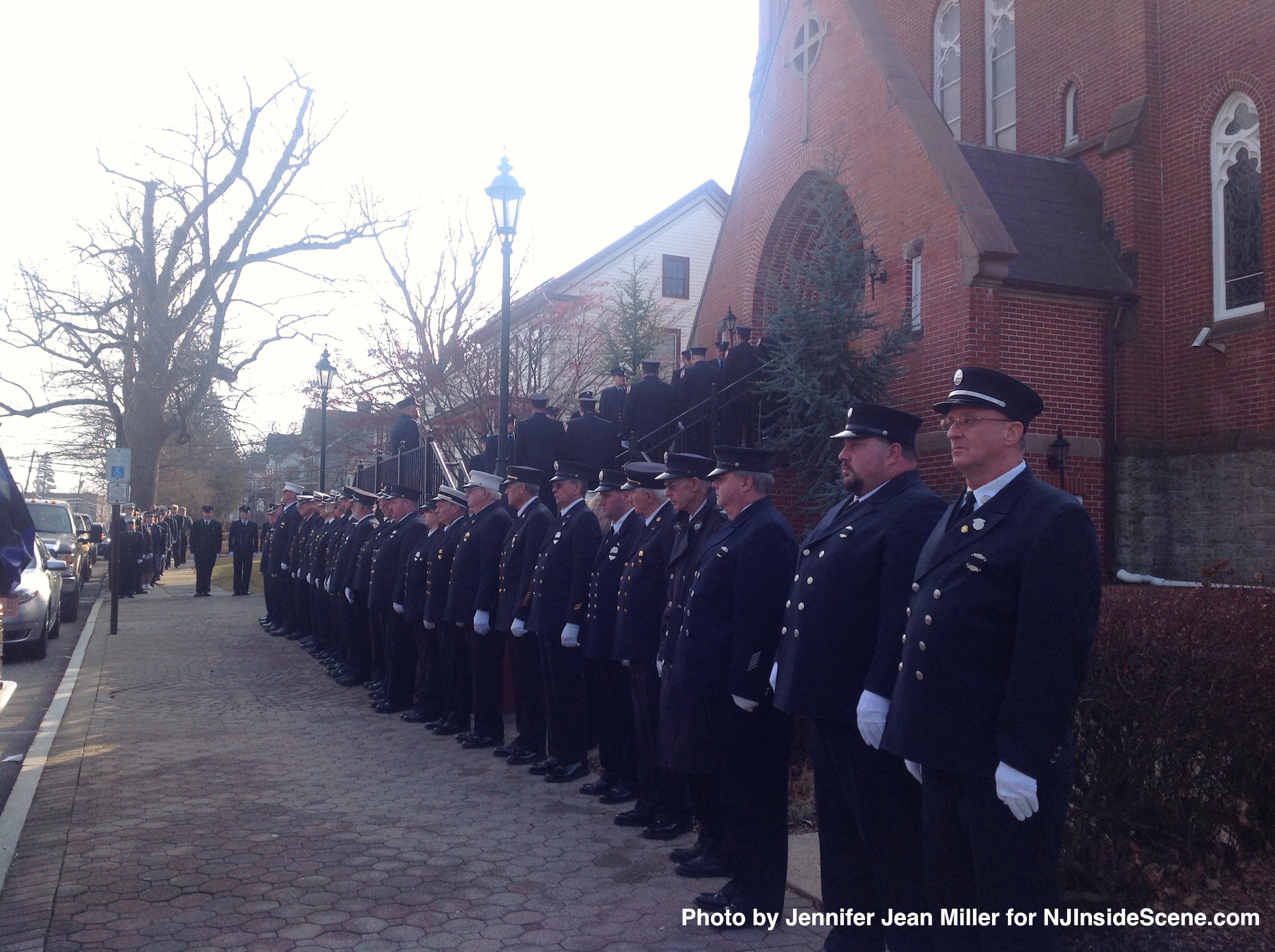 Firefighters outside of St. Joseph Parish

He remarked that the white-draped casket, as well as his own white vestments, represented a “place of joy,” in terms of Thom’s next journey. “Every child wants to be held in the arms of a loving parent, can you imagine how it is to be in the hands of God?” he asked. “Charlie is now in the hands of God.”

McDonnell recognized, however, the sadness people overall still feel when their loved one has passed on. And he continued to provide words of comfort. “I know this man is more alive today than he was a week, a month, or a year ago,” McDonnell said. “His body may be placed in the ground, but he hasn’t died. His soul and his spirit lives on into all eternity.” 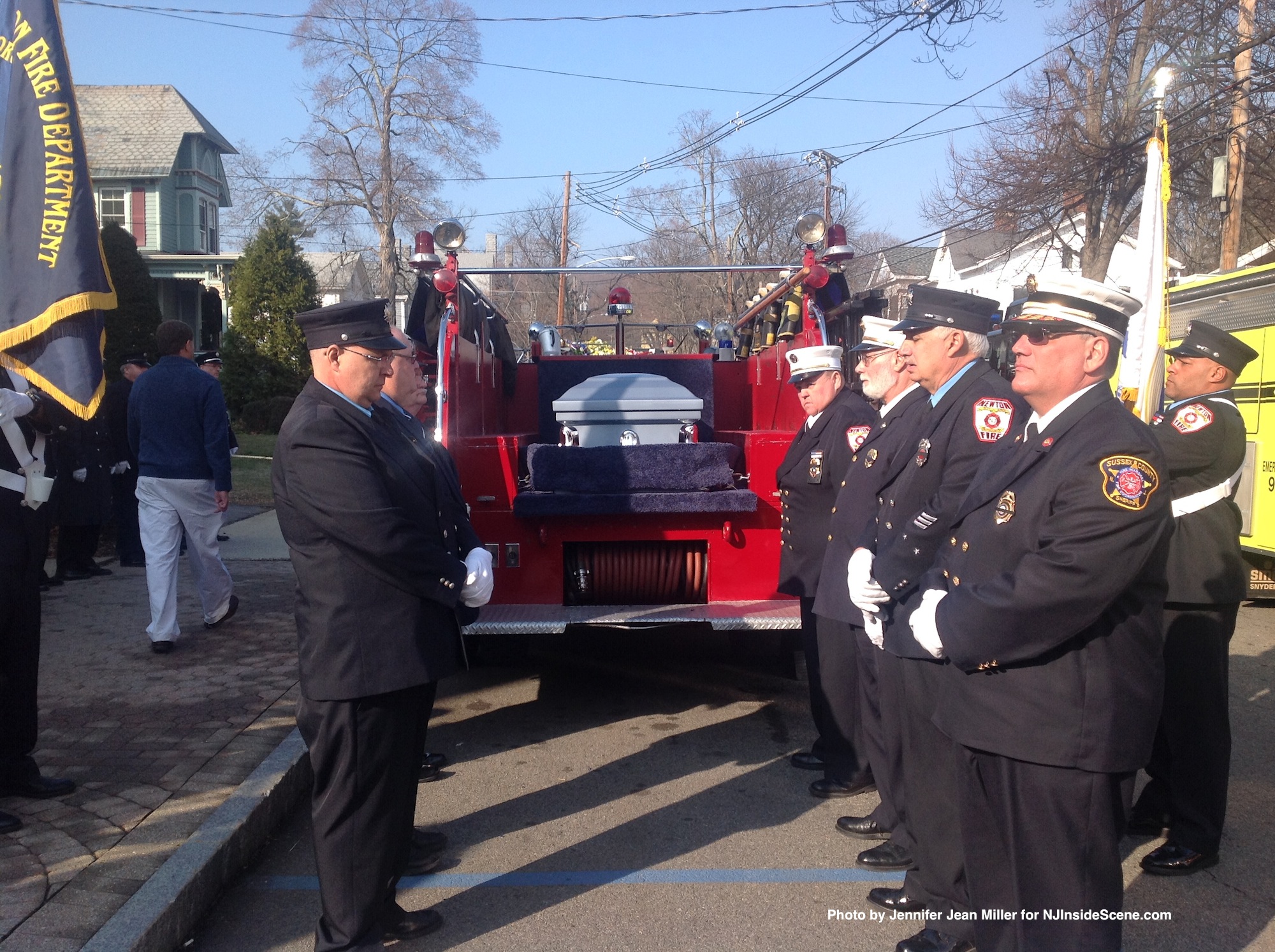 Firefighters who were pallbearers, placed Thom’s coffin atop the Mack Fire Truck.

Thom-Crawford shared the insights into the joys her father celebrated in life, such as attending dinner dances at the firehouse, something she said that he missed the most, following a stroke. She recalled family vacations in Ship Bottom, NJ, with “no cell phones, pagers, plectrons,” which brought a collective laugh from the audience, as so many looked to Thom as a trusted advisor.

“No one could reach Charlie Thom for one full week,” Thom-Crawford said.

“He taught us the value of confidentiality and trustworthiness,” she added, stating that when he was fire marshal and the family would ask about calls, he remained mum.

She said that Thom was known for his integrity, something that she felt started when he served as an altar boy at St. Joseph Parish in the 1940s.

Crawford-Thom said her father loved to travel, and two of his most cherished trips were ones he took with his wife Cheryl, one to Ireland, where even there the couple met with Dublin’s commander of the fire department, as well as to St. Kitts. There were many other vacation memories, she recounted, such as trips to Las Vegas and Oregon.

Following the service, Thom’s coffin was carried from the church, and was greeted by firefighters who saluted him as it was lifted into the back of the 1948 Mack Fire Truck, a jewel that was recently recovered for the Newton Fire Museum, and brought back to Newton. Thom had served in the firehouse that the museum now exists in, and had worked on that truck during his fire career. The Mack was driven by the Newton Fire Museum, before being taken to the Newton Cemetery. 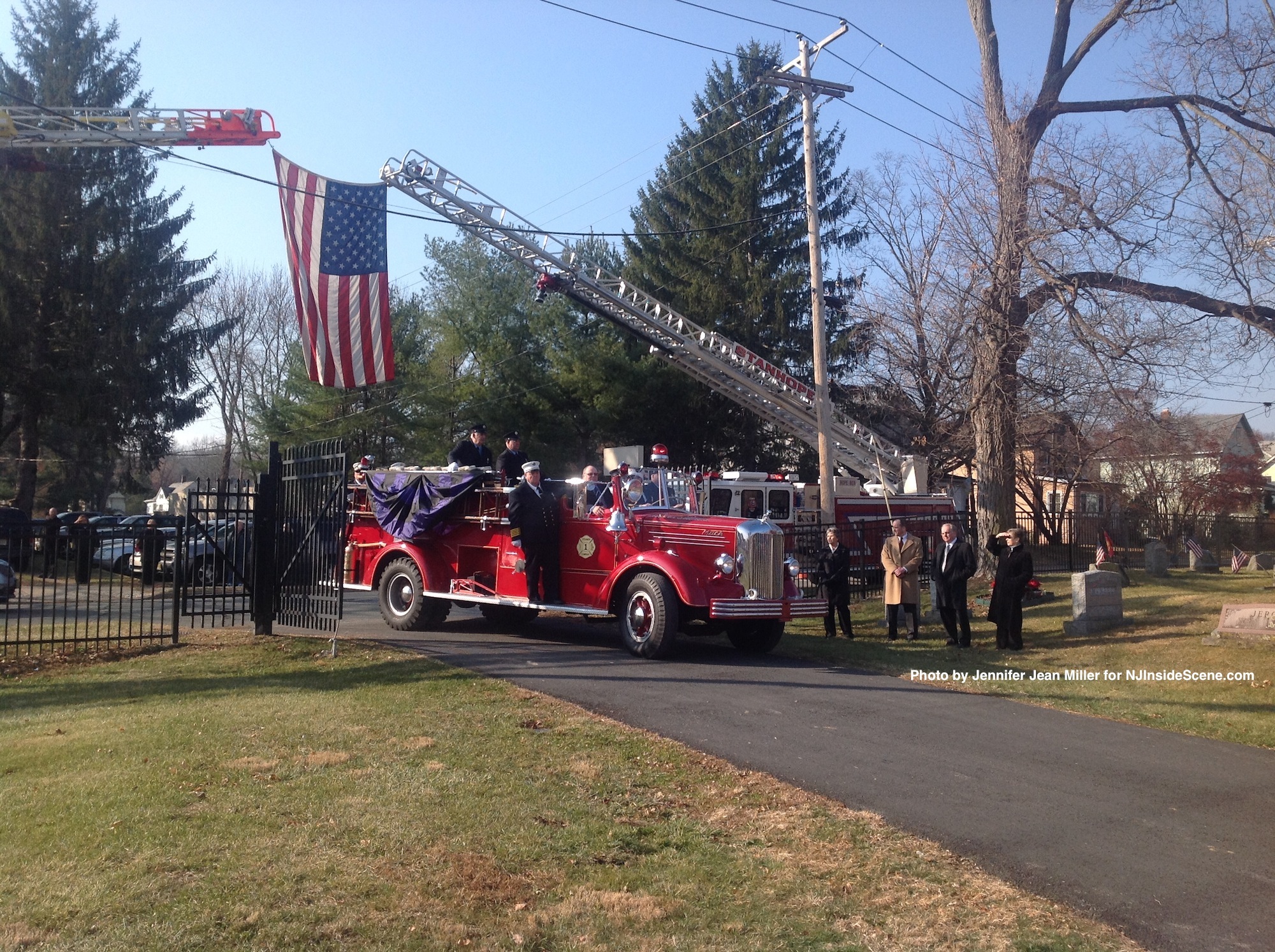 Upon the arrival at the Newton Cemetery, the group was greeted by a flag-draped entry through the gates, with fire trucks from across the county and beyond (among them was Newton, Stanhope, Sussex/Wantage, Fredon, Montague, Hopatcong, Byram, Franklin, Andover Borough, Andover Township, Green Township, Ogdensburg, Stillwater, Sparta, Hampton, Frankford, the fire marshals from Hunterdon and Warren County and the Forest Fire Service). Waiting at Thom’s final resting place, was Tower 804, flying a flag from its ladder. Firefighters gathered up on the small grade above the area where Thom’s coffin was delivered. While family waited under a canopy, the members of the fire department who acted as pallbearers, followed a bagpiper, as they gently laid the coffin down. McDonnell offered some final words.

In an emotional ending, tones set out on the pagers of the firefighters in attendance, saying a final farewell to Charlie Thom.

“On behalf of the Newton Fire Department, it is with deep sorrow and sadness to notify you that Chief Charlie Thom has completed his last call,” was the announcement. “Chief Thom, we thank you for years of service. You have been a mentor and a role model to all of us. Your wisdom and knowledge will be missed. God speed Charlie.”

Editor’s Note: NJInsideScene.com would like to extend our deepest condolences to those who knew Chief Charlie Thom. Although we only casually knew him, in 2012, one of the firefighters who cherished his mentorship asked that the writer of this story to interview him for a profile story. I gladly accepted, and we attempted to coordinate a time. And although there was interest on his end to speak to me, I was told that he also, at the same time, looked at his accomplishments so humbly, and as those who are humble may sometimes do, suggested it be done at a later time. To quote C.S. Lewis, “True humility is not thinking less of yourself, it is thinking of yourself less.” Thank you Charlie Thom for always thinking of others, and we hope our tribute is fitting for a person who will always be so beloved by those who knew you. God speed, Charlie.

Memorial Donations can be made in Charlie’s memory to The Newton Fire Museum, 150 Spring Street, Newton, NJ 07860.

Click the video at the top of the article to view portions of Charlie Thom’s sendoff by the local fire departments.