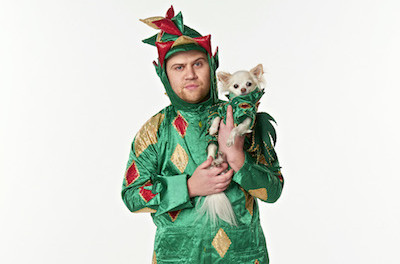 Newton, NJ – As seen on the most recent season of America’s Got Talent, PIFF the Magic Dragon will roll into The Newton Theatre on Saturday, November 21st at 8:00 pm. Tickets will go on sale to the general public on Friday, October 2nd at 11:00 am.

Imagine Larry David in a dragon suit performing jaw-dropping magic tricks and you’ve got PIFF the Magic Dragon. With over 12 million YouTube hits and sold-out shows around the world, PIFF has made a name for himself as the greatest performing dragon of all time. This summer he brought his unique humor to the America’s Got Talent stage, along with his dog Mr. Piffles, the world’s first magic-performing Chihuahua. Mr. Piffles has been levitated, laminated, shackled in a straitjacket and shot out of a cannon all in the name of entertainment.

The pair has entertained in venues such as Shakespeare’s Globe, The O2 London, Sydney Opera House, the Edinburgh Fringe, Soho Theatre in London’s West End, and enjoyed critical acclaim at the Cosmopolitan in Las Vegas with their show “Breakfast at Piffany’s.” In 2012, PIFF joined Grammy Award-winning band Mumford & Sons on their UK tour.

Just one thing: They don’t do Children’s Parties.