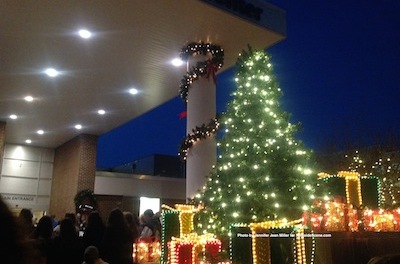 An image from the 2013 Festival of Lights. Photo by Jennifer Jean Miller.

NEWTON, NJ  – The annual C. Edward McCracken Festival of Lights, a beloved holiday tradition for families throughout the region, will mark its 23rd year illuminating the campus of Newton Medical Center on Saturday, November 15.

In addition to kicking off the holiday season, the event this year will also honor the memories of two individuals – a hospital volunteer whose dedication has become nearly legendary, and a local religious leader who was instrumental to the Festival’s founding.

The festival will begin with children’s events and caroling and will culminate with the annual lighting of trees along the hospital’s southern driveway by the McCracken family, and a spectacular fireworks show.

The trees are decorated by sparkling strings of lights purchased by supporters of the hospital and donated in honor of loved ones. Donors may also sponsor the evergreen trees, wreaths, and other elements of the event. Proceeds from the event will benefit Newton Medical Center.

C. Edward McCracken, a respected member of the Sussex County business community and supporter of Newton Medical Center (previously known as Newton Memorial Hospital), began the Festival of Lights more than two decades ago with the simple, humble desire to brighten the hospital campus for patients and visitors during the holiday season. The event caught on and grew each year, including the addition of the fireworks show in the fifth year of the event, which by then had become a community tradition. Following his passing, the event was carried on by McCracken’s family and the Newton Medical Center Foundation.

This year, the Festival will include a memorial to Mary Quinn, a longtime volunteer at the hospital, who passed away earlier this year. Over the course of more than 30 years, Quinn volunteered more than 20,000 hours at the hospital, becoming a recognized figure among patients and the community.

The event will also honor Father Augustine Hinches, who served as the abbot of St. Paul’s Abbey in Andover. Father Hinches, who also passed away earlier this year, was an inspirational figure in the founding of the Festival of Lights. The Abbey is home to a tree farm which for many years provided the evergreen trees planted on the hospital grounds for the event. A recently planted Norway Spruce tree from the abbey farm will be specially dedicated for the event in honor of Fr. Hinches.

Proceeds from the event will benefit the Newton Medical Center Foundation, which supports the hospital’s development. A portion of the proceeds will specifically benefit the latest ultrasound technology for the hospital’s Intensive Care Unit.

The event is sponsored by Smith-McCracken & Wood Funeral Homes as well as the Hazan family. The fireworks display is sponsored by the emergency physicians of Newton Medical Center, Emergency Medical Associates (EMA).

Visitors can support this event by purchasing a string of lights or a fully lit tree. Sponsorships for these and other categories are also available. Attendees may also enter a raffle for a Christmas Fantasy in New York for two, which includes two tickets to Radio City Music Hall’s Christmas Spectacular, transportation to New York City and dinner for two at a prestigious restaurant.

The event will also host a toy drive, to benefit children in need in Sussex County.

For more information, contact the Newton Medical Center Foundation at 973-579-8309.

Additional 2014 Festival of Lights sponsors include: