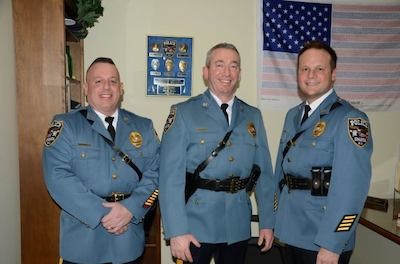 Sparta Mayor Jerry Murphy read Proclamations highlighting each officer’s contributions to our community and The Chief of Police Ernest Reigstad presented each officer with their retirement badges.

WHEREAS, Corporal Susan Parkes has loyally served the citizens of the Township of Sparta as a most valuable public servant since 1990 specifically; with the youth of our community.

WHEREAS, Corporal Parkes, as the Sparta Police Representative of the Sparta Municipal Alliance ensured that the youth of Sparta received appropriate substance abuse education at all grade levels.

WHEREAS, Corporal Parkes is an inspiration to the youth of our community and whose energy and achievements has helped them to glimpse a future of hope and promise;

NOW, THEREFORE, BE IT RESOLVED on behalf of a grateful community, Township Council of Sparta, County of Sussex, State of New Jersey express our sincere gratitude for Corporal Parkes’s distinctive, dedicated and loyal service.

WHEREAS, Corporal William Moyle has loyally served the citizens of the Township of Sparta as a most valuable public servant since 1994.

WHEREAS, While serving in the Patrol Division for his entire career, Cpl. Moyle distinguished himself while serving in a variety of capacities specifically; as a Drug Recognition Expert, Firearms Instructor and a Field Training Officer.

WHEREAS, While on routine patrol in August of 2011, Cpl. Moyle was instrumental in arresting several members of the infamous “James Bond Gang” after they had committed two residential burglaries within the township and fled as the corporal attempted to arrest them. The tri-state area crime spree conducted by this criminal element abruptly was brought to a halt after the crew crashed the vehicle they were operating and were arrested by pursuing Sparta Patrols.

WHEREAS, Corporal Moyle’s professionalism and the contributions that he has put forth to the Sparta Police Department and the Township of Sparta are hereby acknowledged.

NOW, THEREFORE, BE IT RESOLVED on behalf of a grateful community, Township Council of Sparta, County of Sussex, State of New Jersey expresses our gratitude for Cpl. Moyle’s distinctive and loyal service.

WHEREAS, Lt. Joseph Schetting, The Operations Division Commander of the Sparta Township Police Department, has loyally served the citizens of the Township of Sparta as a most valuable public servant since 1990.

WHEREAS, Serving 21 out of 25 years as a Superior Officer, Lt. Schetting was a highly decorated and respected Police Officer. As an instructor, the lieutenant served as the Departmental Training Officer and Firearms Range Master.

WHEREAS, Lt. Schetting has been instrumental in efficiently moving the Sparta Police Department into the 21st Century through research, development and implementation of the latest technology, training and equipment to better assist this department’s officers in accomplishing their missions and to maintain a high level of service and security to the citizens of Sparta Township.

WHEREAS, Lt. Schetting always leads by example. In 2005 following the devastation and the terrible loss of life suffered by the residents of New Orleans in the aftermath of Hurricane Katrina, Lt. Schetting was placed in command of a platoon of 20 Law Enforcement Officers from various jurisdictions from across the nation as they conducted Search and Rescue Operations and maintained Law and Order throughout the storm ravaged city.

WHEREAS, Through hard work and dedication, Lt. Schetting has brought honor and pride to not only the community of Sparta but to citizens across this great nation. His Leadership, Judgment and Devotion to duty and Country are most heartily commended and are in keeping with the highest traditions of the Sparta Township Police Department

NOW, THEREFORE, BE IT RESOLVED on behalf of a grateful community, Township Council of Sparta, County of Sussex, State of New Jersey express our sincere gratitude for Lt. Schetting’s distinctive, dedicated and loyal service.