SPARTA, NJ – DECEMBER 2013 – Children and their families at Newton Medical Center will now be able to pass the time with a large selection of children’s books to choose from, thanks to a generous group of local families in Sparta.

The Sparta branch of the Newton Medical Center Auxiliary recently received a donation of about 500 children’s books that will be distributed throughout the hospital for patients and visitors to read. The books were donated by a local chapter of Adopt-A-Book, which collected more than 3,300 books to be given to local charitable organizations and the hospital.

Kelley Merwin, a Sparta parent who spearheaded the drive, said she was inspired by a friend who headed a similar book drive in Ohio, and contacted him about replicating the effort in New Jersey. Merwin, other parents and their children began the drive in Sparta schools, libraries and businesses as well as on Facebook.

Merwin said the group’s expectations were modest when they began collecting in November. 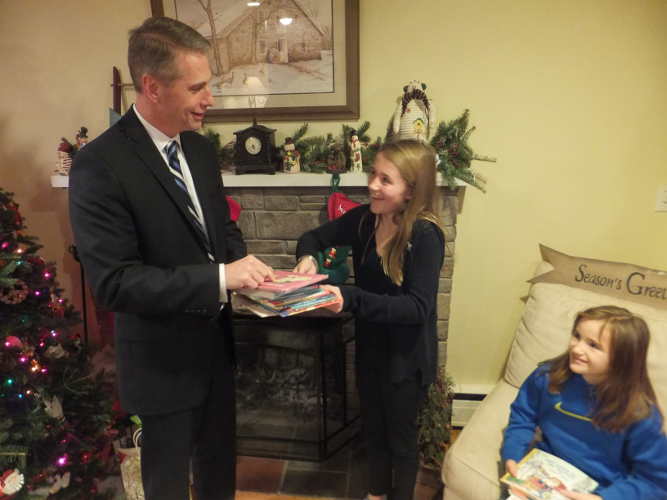 Jim Furgeson, director of community and donor relations for the Newton Medical Center Foundation, accepts some of the books from volunteers Kenzie Merwin (L), and Kate Ryan (R)

“I didn’t think we’d get 1,000,” the group’s initial goal, Merwin said. “All of a sudden they started piling in like crazy. I’m just amazed at how the community came together.”

The volunteers checked each of the books to ensure they were in good condition to be donated. New or gently used books were collected. Sparta Books offered a 10 percent discount on any new book purchased for the book drive.

Megan Sandow, chief development officer for the Newton Medical Center Foundation, which accepted the donation to the hospital on behalf of the Auxiliary, lauded the volunteer group’s efforts.

“This donation is a great example of the connection Newton Medical Center has with the communities it serves, and underscores the importance of our commitment to providing them with the highest quality health care in the region,” Sandow said.

The remainder of the books was donated to Tilly’s Kids/House of Mercy Mission, DASI and Birth Haven, local non-profit organizations that help disadvantaged children.