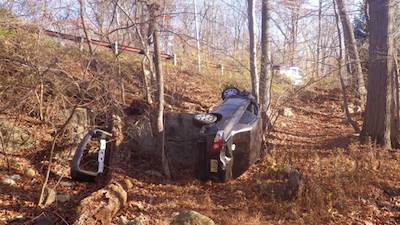 NAME OF THE ACCUSED: Arnt Walaas

REASON FOR THE STOP: He drove off an embankment

CHARGES AGAINST THE ACCUSED: DWI, Reckless Driving, Failure to Maintain Lane and Open Container in a motor vehicle

ANY OTHER INFORMATION: Officer Cirri responded to a report of a vehicle that drove off of a 40 foot embankment.  When he arrived he found the driver Arnt Walaas who stated he was okay.  Officer Cirri saw open beer cans and an open vodka bottle by the vehicle.  The driver had been drinking. Officer Cirri arrested Walaas for DWI.  He was taken to the Police Department and given the Alcotest. He was charged and later released to a family member.