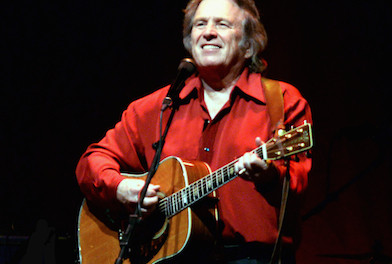 Newton, NJ – American troubadour and singer-songwriter Don McLean returns to The Newton Theatre on Saturday, December 5th at 8:00 pm. Tickets will go on sale to the general public on Friday, September 11th at 11:00 am.

Don McLean came to notoriety in the 1970s with the release of what would become an epic top five “song of the century”, American Pie.

In the late 1960s, Don McLean became the Hudson River Troubadour. He spent the summer traveling from town to town in the Hudson Valley, giving talks about the environment and singing songs for whoever would turn up to listen. A year later, Don was a member of the first crew of the Sloop Clearwater with Pete Seeger. They travelled the Atlantic seaboard giving concerts at each port and featuring in the news wherever they went.

In 1969 his first album, “Tapestry”, with And I Love You So, was released to good reviews and achieved some commercial success. The transition to international stardom began with the release of American Pie, which was recorded in May 1971 and a month later received radio airplay in New York City to mark the closing of The Fillmore East, the famous NY concert hall.

American Pie was released in November 1971, going to #1 in the USA and sending Don to superstardom. Every line of the song was analyzed time and time again to find the real meaning. Don refused to sanction any of the many interpretations, so adding to its mystery.

Thirty years later, Don McLean’s American Pie was selected as one of the 5 greatest songs of the 20th century in a poll by the National Endowment for the Arts and the Recording Industry Association of America.

The second single, Vincent, became a hit in 1972. In the wake of the album “American Pie”, Don became a major concert attraction. Later he also had massive success in 1980 with Roy Orbison’s songCrying.

Don McLean credits his 1997 performance at Garth Brooks’ Central Park concert (attended by over 500,000) as the beginning of a career comeback, bringing down the house with an acoustic rendition ofAmerican Pie. Two years later Don McLean wound up the 20th century by performing American Pie for President Clinton at the Lincoln Memorial Gala In Washington D.C.

In 2000, Madonna had a hit with a cover version of American Pie, which prompted EMI to release a new “Best of Don McLean” CD that gave Don his first top 30 album chart entry in almost 20 years. McLean was pleased with her version, saying “…I have received many gifts from God but this is the first time I have ever received a gift from a goddess.”

Even more surprising than Madonna’s hit with Don’s song, was George Michael’s 2003 decision to record The Grave, from the “American Pie” album, as a protest against the Iraq war.

in 2002 American Pie was inducted into the Grammy Hall of Fame and in 2004 Don McLean was inaugurated into the National Academy of Popular Music Songwriters’ Hall of Fame. In 2007 he shared his life story in Alan Howard’s biography. Don continues to tour and release new material. He lives in Maine on a 300-acre estate with his wife Patrisha and two children.

The historic Newton Theatre, located at 234 Spring Street in Newton, NJ, was founded in 1924. Revitalized and fully renovated, Sussex County’s premier entertainment venue reopened in 2011 as a 605 seat capacity live performing arts center. With it’s rich history and diverse programming The Newton Theatreis essential to the buoyancy of New Jersey’s Skylands region. More information about The Newton Theatre may be found by calling 973-383-3700 or by visiting its website at www.TheNewtonTheatre.com.