NEWTON – The four assembly candidates squared off last night, Wed., Oct 30, for a debate, held at The Newton Theatre.

This type of debate is often held between candidates at the county level, and above and is coordinated by The New Jersey Herald and the League of Women Voters of Sussex Highlands.

After President of the League of Women Voters, Toni Zimmer, introduced the debate, Nancy Hedinger moderated. The debate lasted approximately one hour.

The questions emerged from a number of sources, including from the audience. The candidates’ responses were timed, and then they were allowed a period for rebuttals. 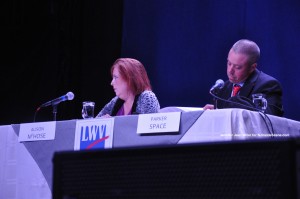 Those debating were Republican incumbents Assemblywoman Alison Littell McHose (R-24) and Assemblyman Parker Space (R-24), on the left side of the stage, and on the right, Democratic Candidates for Assembly challenging them for their seats, Bill Weightman and Susan Williams.

The candidates were first asked for an introduction, with Weightman the first one, who told the public about his background with teaching at the government and university levels, as well as holding a number of Master’s Degrees.

Space talked about his background, with his family having lived in the area since the 1700s, and having owned their business Space Farms, since 1927. Space has served as a committeeman in Wantage Township, and also Deputy Mayor and Mayor. He has also served as the chief of his fire department.

Williams was next up and shared that she has been a small business owner, and has a background as a social worker. She expressed what she seeks to bring if elected, including lower property taxes, economical revitalization, higher paying jobs and light industry, and more STEM (Science, Technology, Engineering, and Mathematics) education in the schools.

McHose spoke more about what has been accomplished in her tenure, working with Senator Steve Oroho (R-24), and Space, who share an office in Sussex County, and also Mount Olive in Morris County.

“Clearly, it’s been challenging in Trenton,” she said. “Though we’re the minority, we’ve been able to accomplish a great deal, and we have a lot more to do.”

There are some issues, which obviously divided the candidates based on their views. The first question was one of the hot buttons for the parties campaigning, and that was the issue of raising the minimum wage from $7.25 to $8.25 an hour, which is a referendum on the ballot required for approval.

“I oppose the referendum as written, I’m not opposed to raising the minimum wage,” said McHose, the first asked to respond.

She said she is against the change that the referendum requests, into New Jersey’s Constitution, which would require that minimum wage be tied to the Consumer Price Index (CPI), and raised incrementally, based on the index.

“We should raise the minimum wage, but not this way,” she reiterated.

Space said at his business, all of his employees are paid above the minimum wage. His concern is that business owners, in turn, will be forced to raise their prices, driving consumers across the river to Pennsylvania, where the minimum wage is still set at $7.25.

Weightman expressed that it is a myth about most minimum wage jobs being allocated to the youth, and that many families are living off of minimum wage paychecks, quoting a number between 25 to 40 percent, making $10 per hour or less. 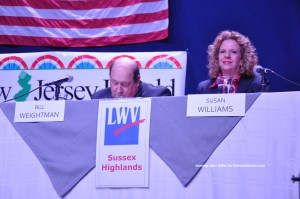 Williams also sided with Weightman about families dependent on minimum wage, perhaps taking home an average of $1,280 monthly. She also feels most companies (though she named Costco as one offering generous wages), would not be as benevolent in offering more than minimum wage, unless pressed to do so.

Williams and Space debated on the point about businesses, with Williams stating that businesses do not always do the right thing as his does. Weightman blamed the Governor with not having upped the minimum wage, and having vetoed a bill about it. McHose said the issue was not due to the Governor but a fight between the Senate President and Speaker of the Assembly.

“It ended in this awful bill,” she said.

The next topic was regarding property taxes.

Williams said, “I don’t see the schools as the villains,” and there are other things that could be done to offset it.

Weightman said that he believes it is a combination of more than 16,000 people are not paying their fair share, plus the Republicans cutting relief, and schools receiving less aid.

Space said one of the major issues is that, in his municipality, 70 percent is allocated for the schools, and without the Fair School Funding, with 60 percent sent to urban school districts.

McHose said additional bills must be created, surrounding the Municipal and County Toolkits, which will help to offer more tax relief.

“We have a long way to go, it’s not a simple solution,” she added.

The next question asked candidates about their take on the Highlands Act and if landowners should be compensated.

Space said there should be a balance between protecting the environment and common business sense, and eliminated the Highlands Act.

Williams disagreed, especially in terms of water, which she described as “gold,” and Weightman siding with her.

McHose, said that the Highlands Act was not based on science, and likened it to a “land grab,” based on the Pinelands Region, which is land in the state, already preserved.

Williams said it would cost jobs without the Highlands.  McHose said that there are already enough restrictions on the land and water, that the Highlands Act is just another restriction and not necessary. Space asked Williams to consider small businesses, whose hands are tied by it.

Why Stay in New Jersey?

A question posed, which came from the audience, said a Channel 12 news report mentioned that three major companies were leaving New Jersey and asked the candidates what they would say to ask them to stay.

McHose mentioned the Business Action Center, and the Red Tape Review Commission, which were formed to help businesses.

“We have opportunities for businesses to stay here and grow here,” said McHose.

“There’s so much New Jersey has to offer,” said Space, who added that they are working for looser restrictions for businesses.

What About Taxes and Schools, Funding?

Both McHose and Space have promoted the Fair School Funding for New Jersey and feel that distribution to districts in suburban areas must be more evenly distributed. Space said good money is being thrown to bad in many cases, which McHose described schools where monies are being sent, are like fiefdoms.

Of these Abbott Districts, McHose added, “The extra dollars don’t reach the children. The teachers don’t get the money.”

Weightman’s wife works at a school in that district, which McHose said she is familiar with his wife’s generosity in the school system in which she works in providing supplies. McHose disagrees that teachers must reach into their pockets for supply purchases.

Williams said some districts would not mind paying the higher taxes because it enhances the quality of their schools, such as in Mountain Lakes, which is known for an excellent reputation.

Is New Jersey too strict? Or should it be stricter?

Williams said although New Jersey is tough, she felt it was not tough enough. Williams did state she did not have issue with responsible gun ownership, and has hunters in her family.

“Probably the people with the issues are the ones who get hold of guns and do horrible things,” she said.

Weightman said a family member accidentally shot him, so the question to him brought a different perspective. He did say he supports the Second Amendment, but was against higher caliber bullets.

Space said that the current legislation impacts law abiding citizens. McHose agreed, and said legal gun owners are often punished. McHose also dispelled the rumor that she supported the lifting of the ban of cop killer bullets, something that has been thrown out by the opposition. McHose has said this is erroneous information, and she would never sponsor legislation to legalize this type of bullet, which is illegal in New Jersey. McHose has said in the past (not brought up at the debate), she has in fact sponsored legislation, asking celebrities and entertainment companies to refrain from profiting off of violent products promoting firearms used in violent ways.

Weightman said with incidents like Newtown, Conn, the rules should be further tightened.

One audience member asked if the candidates would cross party lines, if they did not agree with an idea promoted by their own party. All of the candidates agreed on this one.

“I’m a social worker, I don’t like being put in a box,” said Williams.

McHose said that Republicans in other parts of the state differ from those in the Northwest.

“We all have the ability to vote consciously,” she said.

McHose said she has also challenged the Governor on particular issues if she does not agree.

“I stand my ground,” she said.

This was another area in which the candidates all seemed to be in agreement, was the necessity of the Common Core — which they were all against.

Weightman said that at times, there is too much of an overreliance on testing.

McHose said she does not agree with teaching to testing, and that teachers are too bogged down with administrative duties, instead of teaching.

Williams said, in this area, she probably does not sound like a Democrat.

“Teaching to tests, I’m not receptive to it, and I’m not in favor of it,” said Space.

And then the candidates closed with their final statements.

Weightman said it would most likely be his final campaign, having run three times before over the past 20 years. He said that he has had a hard time running against McHose, having looked at her father, Senator Robert Littell, as his idol.

“We have dysfunctional politics at all levels, I believe in my heart and soul I can bring about change,” said Weightman.

McHose said there is more work ahead, and told the attendees, “We are your voice, our office serves the residents.”

She asked further for the vote on Nov. 5.

Space said that their office is accessible and easy to find, and often, he hears people have difficulty locating their legislators. He said often, people stop by to Space Farms to see him with questions.

“I hope you’ll send us back to Trenton,” he said.

Williams said, “We need forward thinkers in the district, which I think I am.”

She suggested more opportunities were needed for the youth, and advocated her smart growth program, which she calls for high paying jobs for New Jerseyans, which is further noted on her website as “not low paying polluting jobs.”