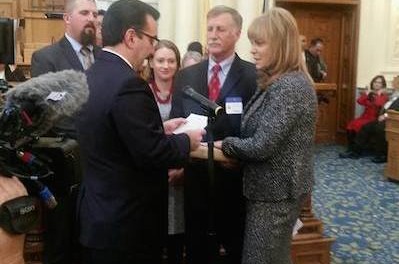 Assemblywoman Phoebus and her husband of 41 years, Bob, are the proud parents of two daughters, Lindsey and Ashley, and the proud grandparents and two granddaughters, Amelia and Abigail, and a grandson, Hunter. They have been co-owners and operators of Farmstead Golf & Country Club since 1985, where they employ roughly 100 people during their peak season. The business has been in their family since 1961.

Reducing the size and scope of government and the inequitable school funding formula must be addressed if we are to reduce the property tax burden in New Jersey,” said Phoebus.  “Job creation through the growth of the private sector is another top priority. I am honored to serve the people of the 24th Legislative District and look forward to working with my colleagues in Trenton to make our state a more affordable place to live, work and raise a family.

In 2012, Phoebus won a seat on the Sussex County Board of Chosen Freeholders. As a Freeholder, her oversight responsibilities include the Chamber of Commerce, Economic Development Partnership, the Sussex County Community College Board of School Estimates and the Department of Human Services.

Phoebus is a member of Newton Rotary International and previously served as president of Hilltop Country Day School and the Sussex County Horse Show. She also sat on the Board of Directors at National Community Bank.