Attendees wait at the Philly Curbside Creamery truck at the festival. Photo by Jennifer Jean Miller.

RANDOLPH, NJ – More than 5,000 attendees flocked to the County College of Morris on Saturday, August 9 for the Just Jersey Food Truck Festival. The event promised 20 gourmet food trucks, live music, a dunk tank to support the Town of Newton Fire Museum, a Beer Garden, free face painting and games, bubble soccer with Jersey Club Sports, and vendors, among the happenings.

While some raved about the event, others were irritated, and vented their disappointment at the entry gate, on the lines, and on the group’s Facebook Page. Before entering, attendees were told the wait at some of the food trucks would be up to one hour. Some of the vendors ran out of food, and left the event early. 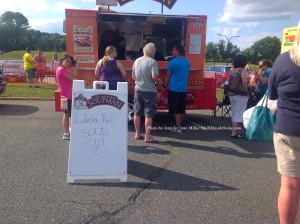 The Original Soupman sold out of the Lobster Rolls. Photo by Jennifer Jean Miller.

All adult attendees were required to pay a $5 per person entry fee, with children under the age of 12 given free entry.

Many however stayed and waited patiently on the long lines, some seen walking away from the wine vendor, toasting with their glasses as they enjoyed the sunshine and festivities. Others stormed out, annoyed by the wait, the dwindling menus, and the lack of provided seating. Others found their seating though on the grass, and quietly relaxed under the shady trees on the college grounds adjacent to the parking lot where the festival took place. 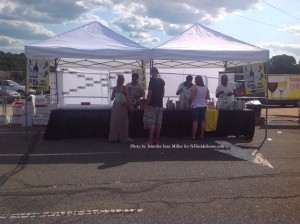 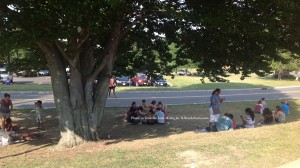 Festival goers relax in the shade with their fare and beverages. Photo by Jennifer Jean Miller. 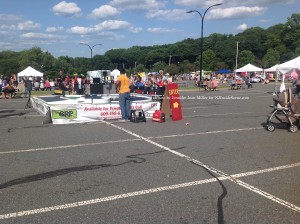 Fun Kart Party Racing, one of the free activities in the middle of the festival. Photo by Jennifer Jean Miller.

“It was really overwhelming,” said Alison Kohler, the event’s organizer, about the first time festival.

The festival focused on Jersey and tristate area eats from a blend of gourmet food truck vendors and others specializing in unique culinary creations. 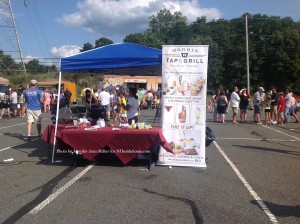 A crowd waits on line behind the Morris Tap & Grill booth. Photo by Jennifer Jean Miller.

One attendee, John Krog, Tweeted words of encouragement to those who planned to visit the festival, “Be patient if you go to the Just Jersey Fest, Randolph. Victims of their own success: nice weather, big crowds.”

“Hope ya’ll work out the kinks before next year,” offered Angie Alzawa on Facebook. “Long, long lines. Would have liked a menu showing vendors and what each sells. Also, suggest a cart vendor with wheels selling water.”

Other more seasoned vendors who attend similar events regularly, came efficiently stocked with products and supplies, and remained at the grounds until the very conclusion of the festivities, which ran from 10 a.m. to 6 p.m.

“It was phenomenal,” said Joshua Ulmer of Peace Love Pops, a food vendor, which was equipped with all-natural, handcrafted ice pops. “I was fully prepared.” 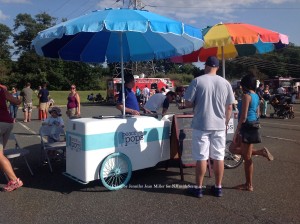 Ulmer carts his ice pops throughout the Garden State to a variety of locations, at festivals, farmers’ markets, and in Hoboken, among places. He is already accustomed to highly attended events, and has mastered the art of preparing adequately in advance. At $3.00 a pop for each pop, each person who visits Ulmer’s carts adorned with brightly colored umbrellas, can try a variety of flavors. A number of them on the menu were crossed off, though at the end of the festival, Ulmer was handing out on the house his Pineapple popsicles infused with lime juice, fresh basil and pieces of mint, for an eclectic and refreshing combination.

Another food vendor who raved about the event was Executive Chef Lawrence Rosenberg of Bacon Bites. Rosenberg’s creations focus on decadent chocolate covered bacon specialties, such as the sweet and gently salted bacon and dark chocolate handcrafted chocolate bars, known as the “Bacon Bar.” 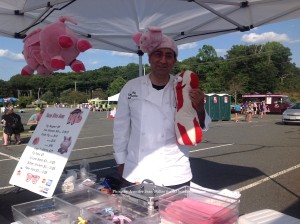 “I’m bacon, I’m chocolate, I’m cute, I’m delicious, I’m salty, I’m sweet,” the label of this product reads, with Rosenberg’s brand recognition of a smiling pink cartoon pig mascot with a layer of chocolate along its head and back. 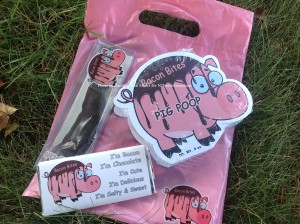 An array of treats from Bacon Bites. Photo by Jennifer Jean Miller.

“Everything has got bacon,” said Rosenberg of his products, while sporting his white executive chef’s coat, and a plush pink pig hat.

Rosenberg posed for NJ Inside Scene wearing his spirited outfit, and holding a stuffed smiling piece of bacon.

Among his other offerings for sale were pig emblazoned magnets, sunglasses, t-shirts, rubber noses, silicone bands, bumper stickers, paper hats, and pig stuffed toys, along with his tasty treats.

“The bacon world is very strange,” said Rosenberg, who takes his chocolate and bacon business on the road frequently within New Jersey, and to other locations beyond like a bacon festival across the Delaware in Easton, PA.

In New Jersey, he has participated in Bacon Week at the Tropicana Casino & Resort in Atlantic City. His Peanut Butter Bacon garnered an award at Baconfest Florida, with Bacon Bites taking home the bacon in the form of the first place honor for best dessert.

Rosenberg’s chocolate bacon fare menu spotlights Twinkies with smoked bacon on the bottom and coated with a layer of chocolate, bacon brownies or bacon Oreos, Ruffle-style potato chips and pretzels with dark chocolate and bacon pieces, and “Pig Poop,” which are chocolate covered bacon chunks that are the bite-sized, broken pieces of items from within his product line.

“Although it tastes scrumptious, it doesn’t always look so nice,” Rosenberg’s marketing materials read about the “Pig Poop.”

A special “piggy wipe” is included in the above box of chocolates.

Rosenberg is as versed in food festivals, including food truck festivals, as he is in the chocolate and bacon business.

He said the wait at the Just Jersey Food Truck Festival was short compared to a similar festival at the Meadowlands he was present at, where attendees waited up to five hours in line at some vendors.

“We’re used to that,” he said, referring back to the 18,000 person strong crowd at the Meadowlands.

Rosenberg said his company attends 80 of these types of events a year.

“For a first time event, it’s a great event,” he contributed of the Just Jersey Food Truck Festival.

He added that, “People may need to wait,” in regard to the food. “They [attendees] think it’s fast food…it’s not.”

Rosenberg said that the foods prepared on the trucks are freshly done on the premises, and can require some time for these restaurants on wheels.

A wait at The Cow and The Curd. Photo by Jennifer Jean Miller. 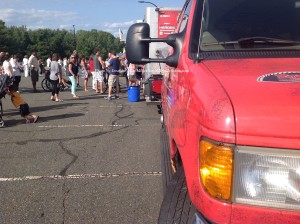 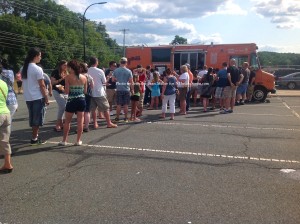 The Taco Truck at the event. Photo by Jennifer Jean Miller.

Rafael Contreras and Samuel Pena were two others who did not mind the wait. Their truck differed from the many others on the premises because instead of food, visitors to the festival could enter into the rear and a different world, filled with fashionable clothing and accessories. 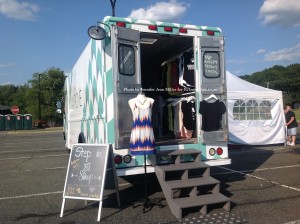 Via Rove, a women’s clothing store on wheels. Photo by Jennifer Jean Miller.

Additionally, Contreras and Pena had air-conditioning in their space.

Their business is Via Rove, a concept they started about four months ago.

“We wanted to open up a store,” Contreras told NJInsideScene.com. “This was a great way to move around.”

Via Rove travels to locations such as festivals and fairs, and makes stops to cities like Hoboken. Home parties, bridal parties and “Girls’ Nights In,” are among the other offerings.

Two Independent Beauty Consultants from Mary Kay, Denise Harris and Gina Marini were smiling and greeting visitors at one of the vendor booths, staying cool in the heat, with an array of products to show. When guests were not on the food lines, they stopped to some of the vendors, including Harris and Marini. The duo is part of the recently crowned number one Mary Kay sales unit in New Jersey, led by Executive Senior Sales Director, Cindy Machado-Flippen. Machado-Flippen was just crowned on behalf of her unit in front of thousands as the Queen at the company’s Pearl Seminar, and is one of the top performing sales directors in the United States. Attendees at the event put their names in to meet up with Harris and Marini at a later date after the event for complimentary pampering sessions. 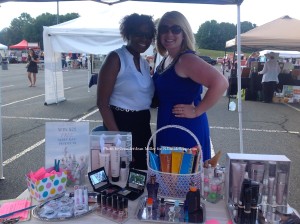 “The event was such a success,” added Candace Kounter, Silpada Independent Representative, of the crowds.

Her table was next to Harris and Marini’s. Though Kounter watched some attendees irritated with the wait, and unable to come to her table as they waited on line, she in turn, took her show on the road, and carried her sterling silver jewelry over to them.

“I took mine out to them,” she said of her products, as she also toted catalogs into the crowds. “I’m here to deliver a smile.”