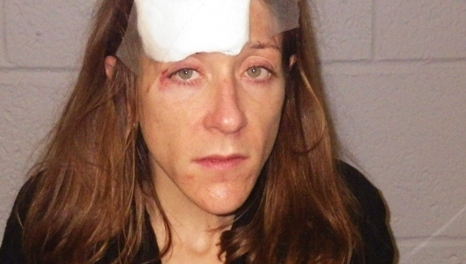 NAME OF THE ACCUSED: Julie Lang

REASON FOR THE STOP: Caller called in an erratic driver

ANY OTHER INFORMATION: A motorist (Being the eyes and ears for their Police Department) called in a vehicle they were following that was all over the road.  This vehicle was going over the double yellow lines. At one point it went up onto a curb and almost struck a light pole.  The caller followed the vehicle into the Quick Chek parking lot.  Officer Kraus and Sgt. O’Shea watched the vehicle pull out of a parking spot and pull into another one.  Officer Kraus stopped the vehicle driven by Lang.  While speaking with Lang, she reached under the front passenger seat. She was told several times to stop reaching under the seat but kept trying to reach under there.  Officer Kraus grabbed Lang by her shoulder and ordered her out of her car so she couldn’t reach under the seat.  Lang refused to get out.  Officer Kraus tried to pull her out but she grabbed the center console. Officer Kraus struggled with Lang and pulled her out of her car.  Lang had something in her hand and refused to open her hand. Again Lang struggled with Officer Kraus. She was flailing her arms and attempted to put her hand in her mouth and pocket. She tried to pull away and was taken to the ground.  Lang sustained a cut to her forehead.  She had a small piece of empty foil in her hand that she was trying to hide.  It was empty.  In the car she possessed two crack pipes copper brillo, and a small baggy of suspected crack cocaine.  She was arrested and brought to headquarters.  She was given the Alcotest and a DRE exam. She was charged and released the next morning after no one picked her up.