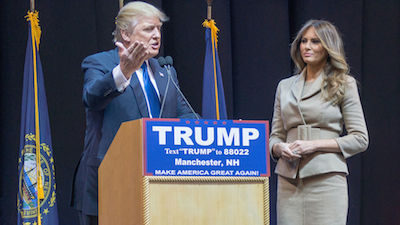 After filing a lawsuit in California against Republican Presidential Candidate Donald Trump, which was dismissed reportedly due to issues with her paperwork, “Jane Doe,” a California resident, has made another attempt, this time with Princeton, NJ patent attorney Thomas Meagher, who initiated the filing of a $75,000 lawsuit against Trump as well as convicted billionaire Jeffrey E. Epstein.

Epstein served time for soliciting sex from minors, with flight logs on the “Lolita Express,” his private plane, citing that even Bill Clinton had been in the air with Epstein 26 times, ditching his secret service detail for some of those flights. Law Newz (click here for the story) described the federal protection of Epstein in the civil case against him as “shameful” and a “sweetheart deal.”

The latest case alleges that Trump, who also knows Epstein, raped the victim when she was 13 several times at parties at Epstein’s home in Manhattan. The victim today is about 33. The suit also involves the testimony of a woman who claimed to be a witness, using the alias, “Tiffany Doe” in her testimony.

In the Trump/Epstein case, Trump’s attorney Alan Garten told Law Newz that the suit against Trump was “politically motivated” and the accusations against him “unequivocally false.”

The author of the Law Newz story, Rachel Stockman, the site’s managing editor and Mediaite.com’s senior editor, describes the suit in her headline as having “little chance of succeeding.”

Stockman, who assures readers that Law Newz will continue to keep its eye on the suit’s docket said that the statute of limitations “has run up” on many of the claims within the suit. She also noted that there is no known police report, DNA evidence, or taped conversations, and only the other testimony of “Tiffany Doe” backing “Jane Doe’s” statement.

Meagher, according to Stockman who noted the repercussions for false allegations in her story, said that Jane Doe’s attorney, did not respond to multiple requests for comment to Law Newz.

InsideScene.com consulted with Richard D. Pompelio, Esq. of the New Jersey Crime Victims’ Law Center about the case. The law center is the first of its kind in the nation offering pro bono representation to crime victims. He not only assured that the New Jersey State Constitution was equipped with the Crime Victims Rights Amendment and helped to strengthen New Jersey’s legislation in benefit of crime victims with tougher consequences for those guilty of violent crimes, but he was also the chairman of the Victims of Crime Compensation Board.

Pompelio offers objective insight into the suit, after having read several articles as well as the original complaint against Trump and Epstein.

“A fair amount of my time is spent working with victims of sexual assault, especially victims and adults who were victimized as children,” Pompelio began. “We have filed a great number of lawsuits involving these victims, but I must say that from the standpoint of a lawyer who specializes in this area, I would not have taken this case. I am not saying that I do not believe the plaintiff but the circumstances surrounding the filing raises questions about its sustainability and ultimate success.”

Among Pompelio’s concerns he asked why “Jane Doe” did not find an experienced attorney to take the case. According to Meagher’s own website, which has now been taken down (Law Newz provided an archived version, click here), details only his experience in trademark, commercial defamation and patent litigation. Meagher also described his experience in the field of patent litigation, licensing and prosecution management. In addition to his J.D., he was awarded a B.S. in Electrical Engineering.

Pompelio added, “Her substantial delay in filing because she was fearful of Trump and any other subjective intimidation arguments she may make will probably not be sufficient to withstand a motion to dismiss.”

Law Newz noted that the victim said that she was under “mental duress,” which is why she did not file sooner. She additionally stated that following the filing in California, that Garten defamed her. The author of that story noted that, “At this point, the real identity of whoever is behind these lawsuits has yet to surface. It would be hard to prove that an anonymous woman suffered damage to her reputation if no one knows who she is.”

Pompelio evaluated the lawsuit’s timing. “Oftentimes,” he said, “individuals abused as minors struggle through many years of personal trauma before they can move forward. Many times the injury is so deeply depressed that it takes intensive prolonged therapy to bring it out. That should be understood and if that is the case here, the plaintiff must be able to produce a mental health provider who can substantiate this fact.”

“Nevertheless,” he added, “this country is in the midst of the most toxic political battle in memory. Donald Trump has previously commented publicly that he intends to attack Bill Clinton over his past indiscretions. A lawsuit such as this could be seen as a tactical maneuver on the part of Hillary Clinton supporters to neutralize such attacks and protect Hillary in the upcoming election.  While this may or not be the motivation of this lawsuit, the questions will be raised and the arguments that will ensue to further drive down the level of integrity of the battlefield on which this election is being fought.  Politically, I don’t think it will make much difference in the election but the lawsuit will become another football for the political pundits to kick around.”

Overall, Pompelio said he does not “see much good coming out of this lawsuit.”

“Each week I personally experience adult and child victims of sexual abuse who receive no social justice,” Pompelio explained. “Too often, they are told by the prosecutor that their case will not be prosecuted because under our existing criminal laws and procedures, a conviction is not probably sustainable.  In the civil realm, lawyers tell them that they do not have a financially viable lawsuit against the offender because, even if they obtain a sizeable judgment, there is no financial resource to provide recovery for a judgment.  Victims in this country every day become re-victimized by a criminal and civil justice process that continues to be tainted by powerful outside influences.  An example is presence of the Catholic Church surrounding the unwillingness of the New Jersey legislative and executive branches of our state government to abolish the civil statute of limitations for sexual offenses.  Accordingly, this lawsuit against Donald Trump will, in all probability, have a negative impact on the rights of crime victims to achieve justice resulting from the harmful conduct of others.  The credibility of victims is critical in every case and a case such as this will only fan the fires of pre-judgment doubt on the part of too many and further suppress the need for victims to be treated with fairness, compassion, respect and dignity in the justice system.”

“My ultimate conclusion is that this lawsuit will probably cause further harm to the plaintiff as well as having a negative impact on the rights of crime victims throughout the nation,” said Pompelio. “Victims of violence are wounded individuals who need to rely on the integrity, wisdom and good judgment of those individuals, from both the public and private sectors, who will be addressing their situation in one form or another.”