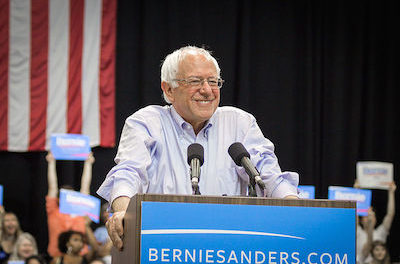 Former Presidential Candidate Bernie Sanders and his team were secretly mocked and suppressed by the DNC. Creative commons image by Nick Solari.

Since the Wikileaks emails have surfaced, which resulted in the resignation of Democratic National Committee (DNC) chair Debbie Wasserman Schultz, these emails paint an interesting picture into the characters of those pulling the curtain strings for the DNC.

Among their many emails, which InsideScene.com plans to highlight, include manipulation of major media outlets, mocking of Bernie Sanders and his supporters, and plans to stage protests using their own interns as protesters.

In spite of committing election fraud during the primaries, which resulted in Bernie Sanders losing the nomination and Hillary Clinton garnering it, Sanders has stood in support of his former opposition.

Salon.com, a known liberal publication, released a story that expressed how Sanders supporters had hoped there would be a moment similar to Ted Cruz’s at the Republican National Convention (RNC) where Sanders would back away from the Clinton team. Instead, he continues to support her, a move that has brought chagrin to Sanders supporters.

“Hillary Clinton must become the next president of the United States,” Sanders said.

With the famous catchphrase, “Feel the Bern,” Silverman quipped about herself that she “put some cream on it” and told the jeering audience members from the Sanders camp, “Can I just say to the ‘Bernie or Bust’ people – you’re being ridiculous.”

Sanders supporters continue to be beaten down by the DNC, in spite of the many emails that have been released that their candidate was suppressed by the Clinton team, including Debbie Wasserman Schultz (referred to in many emails as “DWS.”). Wasserman Schultz also used a personal email address for her correspondences with the DNC, a gmail address hrtsleeve@gmail.com.

Individuals can request via the Freedom of Information Act (FOIA) information about DNC operations. It is a violation of rules for politicians and government employees to use private email addresses or their own servers, because of the FOIA rules for government to remain transparent. Not only was Wasserman Schultz then the DNC chair, but she is also a congresswoman in her home state of Florida (D-FL 23rd District) and should have never corresponded via a private email address.

This lack of transparency is what also led to issues with Hillary Clinton using her private email address and server for government emails (click here for more information) and is a practice deeply frowned upon even at levels of local governments, including school board representatives.

However, the DNC attacked Mitt Romney’s email correspondences in 2011, flooding the Massachusetts Government with FOIA requests in 2011. Click here for a story in the Huffington Post.

Here are some examples, however, of where DNC officials manipulated media outlets and also circumstances in Hillary Clinton’s favor to win the nomination over Bernie Sanders. Plus, sent out their own protestors, had moles within the Sanders’ camp and fought internally.

The original headline for the realclearpolitics.com article read: “Chaos At Nevada Democratic Convention; DNC Leaders Flee Building As Sanders Supporters Demand Recount.” Click here to view the original email where DNC officials, specifically Luis Miranda, worked to have this article edited to reflect that the DNC was not involved in the event. 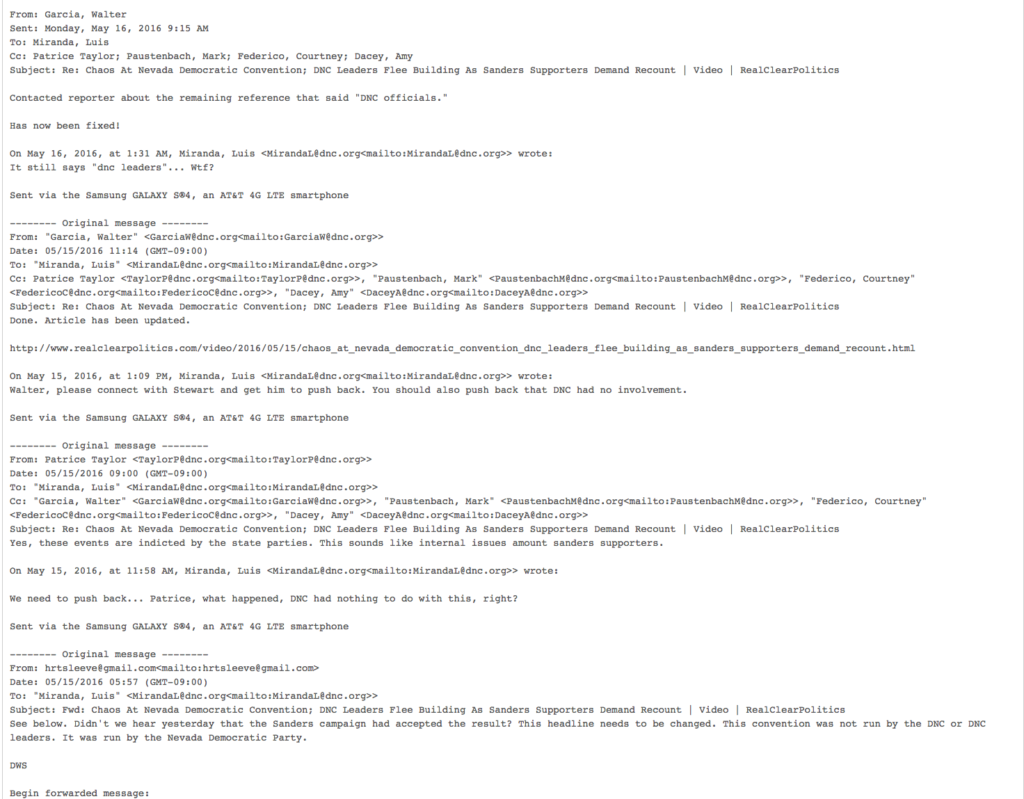 Manipulating a writer with headline and content changes during the Nevada Democratic Convention. Image courtesy of Wikileaks.

This article sent DNC officials into a flurry on May 15, 2016, including Wasserman Schultz, who signed off on one email with her initials “DWS,” asking for her underlings to request that the press change headlines for it to be clear that Sanders supporters accepted the change. She wrote with her personal email.

“Didn’t we hear yesterday that the Sanders campaign had accepted the result?” Wasserman Schultz asked. “This headline needs to be changed. This convention was not run by the DNC leaders. It was run by the Nevada Democratic Party. DWS.”

Miranda wrote to another DNC official, Patrice Taylor, “We need to push back…Patrice, what happened, DNC had nothing to do with this, right?”

Miranda then sent correspondence to another representative, Walter Garcia, and ordered, “Walter, please connect with Stewart and get him to push back. You should also push back that DNC had no involvement,” to which Garcia replied, “Done. Article has been updated.”

But it did not end there. Miranda fired back to Garcia, “It still says ‘dnc leaders’ …Wtf?” to which Garcia answered, “Contacted reporter about the remaining reference that said ‘DNC officials.” Has now been fixed!”

And while the url still has “DNC” within it, the article, as clarified by reporter Tim Hains, was changed. It reflected the “State Party Chair,” not the “DNC Chair.”

A couple of days following the realpolitics.com article, a smaller group corresponded about an article in the New York Times about reported strains between the top DNC leaders and Sanders. It is known, Sanders told Wasserman Schultz if he was elected president she would no longer remain in her post with the DNC. 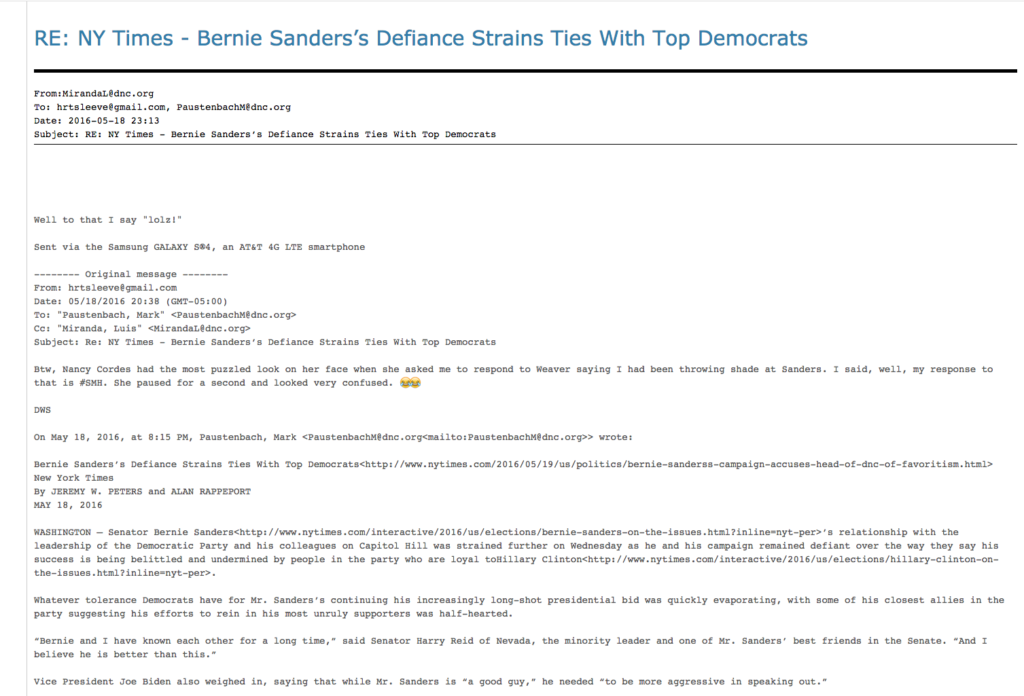 Wasserman Schultz, using her personal email address again, remarked to Miranda and another DNC official Mark Paustenbach about a dialogue with CBS News congressional correspondence, “Btw, Nancy Cordes had the most puzzled look on her face when she asked me to respond to Weaver [Jeff Weaver Sanders’ campaign manager] saying I had been throwing shade at Sanders. I said, well my response to that is #SMH. She paused for a second and looked very confused.”

Signing off her correspondence again as “DWS,” Wasserman Schultz added in an emoji at the end often called “Face With Tears of Joy,” because it shows the emoji laughing so hard it is crying. 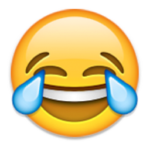 The emoji that Debbie Wasserman Schultz used to mock the Sanders team and reporters. Image courtesy of iemoji.com.

To Wasserman Schultz, Miranda replied, “Well to that I say, “lolz!”

DNC in Cahoots with Politico Reporter

Ken Vogel of the publication Politico, according to this leaked email (click here for original) sent Paustenbach, the DNC National Press Secretary & Deputy Communications Director, his story in advance for approval from the DNC, before the story even made it to the desk of Vogel’s Politico editor. 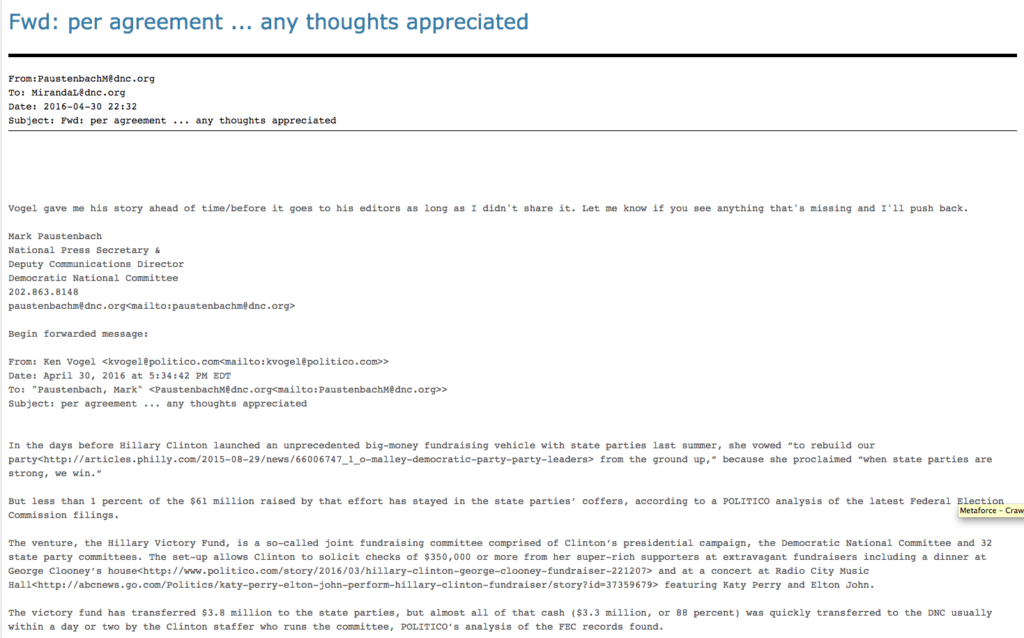 A Politico reporter sent his article to the DNC before his own editor. Image courtesy of Wikileaks.

“Vogel gave me his story ahead of time/before it goes to his editors as long as I didn’t share it,” Paustenbach wrote to Miranda. “Let me know if you see anything that’s missing and I’ll push back.”

Miranda, the DNC Communications Director, corresponded with another staffer, Pablo Manriquez regarding giving questions to CNN’s Jake Tapper to ask DNC officials. Jason Seher, a Turner official apologized to Manriquez about “GOP nonsense,” during a time that Miranda was on CNN. 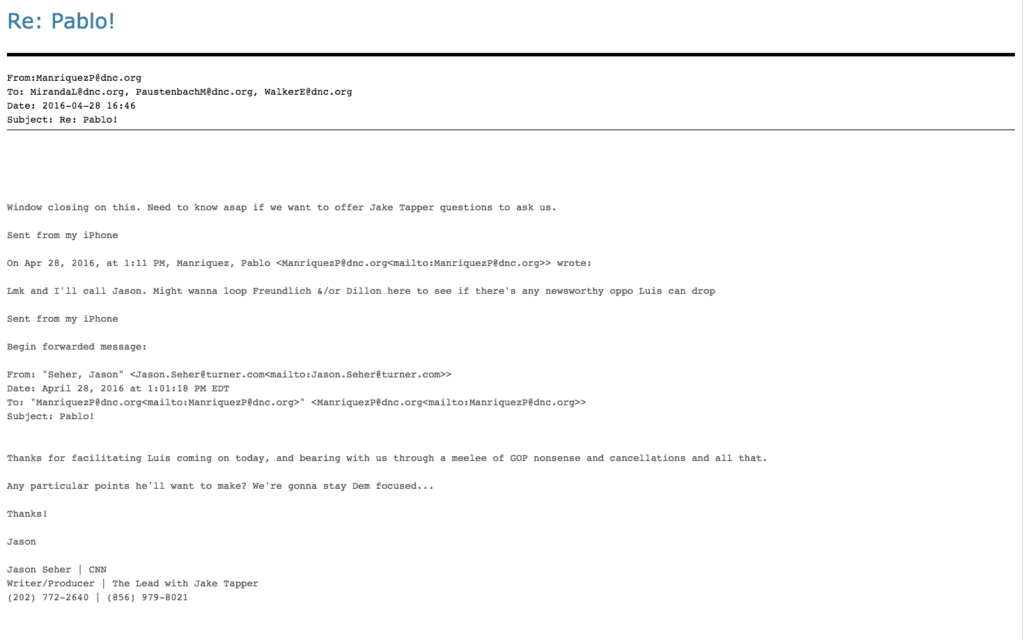 The discussion among DNC staffers about what questions to send for CNN to ask them. Image courtesy of Wikileaks.

“Thanks for facilitating Luis [Miranda] coming on today, and bearing with us through a melee of GOP nonsense and cancellations and all that. Any particular points he’ll want to make? We’re gonna stay Dem focused…” Seher wrote.

Manriquez, DNC media liaison, pressed Miranda for a reply to the inquiry from CNN’s request about questions they should ask the DNC. He wrote to Miranda, “Window closing on this. Need to know asap if we want to offer Jake Tapper questions to ask us.”

Various issues with communications with CNN started internal strife between DNC Staffers. In a comical email thread displaying this, Manriquez is now becoming an “internet legend” on social media circuits, after Wikileaks have also surfaced showing how Miranda abused Manriquez, creating a new hashtag #ImWithPablo, after Kate Houghton, another DNC staffer ratted him out. Manriquez was accused of “f**king off” because CNN did not put the DNC in the time slot they had requested.

“Pablo,” she wrote, “f**k off. Ryan is asking one question at the guidance of Debbie [Wasserman Schultz]. This is ridiculous. Just tell us no and move the f**k on. Adding my team so they know exactly where you all stand on this. I will let DWS know.” 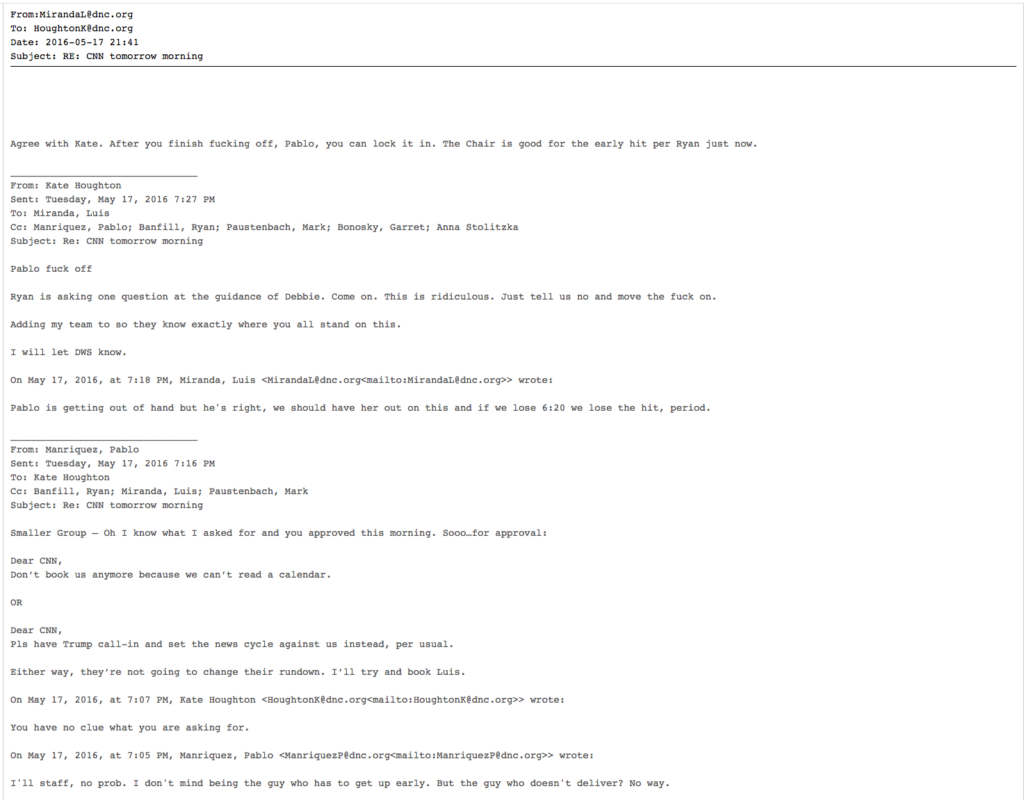 Miranda addressed Manriquez, “Agree with Kate. After you finish fucking off, Pablo, you can look in it. The Chair is good for the early hit per Ryan just now.”

Manriquez has a Twitter account where he describes himself in the words, “I was @TheDemocrats’ broadcast media booker.”

In a simple email correspondence between Paustenbach and Wasserman Schultz, again using her gmail account, with a subject headed that Weaver believed that Clinton and Sanders should “go to convention” to duke out the nomination among their delegates, “DWS” gave one simple reply:

Debbie Wasserman Schultz refers to Bernie Sanders’ campaign manager as an “a**” in this email. Image courtesy of Wikileaks.

On July 23, after Wikileaks revealed the emails, Weaver told ABC that “Someone does have to be held accountable,” and expressed that there was “misconduct at the highest level of the staff within the party” and that it would ‘reinforce’ about the DNC that top officials on staff have ‘fingers on the scale.’”

But, only two days later, Weaver told CNN it was “time to go forward,” and “is the time to elect Hillary Clinton and defeat Donald Trump.”

Though Wasserman Schultz slammed Weaver in emails, and expressed her dislike of him among her correspondences with her staff, he told CNN, “I think now is the time for party unity,” and about Wasserman Schultz said, “I think she put the party ahead of herself,” regarding her resignation.

Another damning email was among staffers regarding a counter event that was rumored to take place in Alaska with Sanders’ supporters. The DNC team deliberated if it was fact, based on the source as a Facebook post.

Miranda again is active in the conversation noting, “This is all the FB [Facebook] post has so we need the state party to do some digging.”

The DNC officials mentioned Kay Brown, Executive Director of the Alaska Democratic Party in their email, one of them, Kate Houghton replying, “We can’t go to DWS [Debbie Wasserman Schultz] with just Facebook intel. Kay told me she has friends inside the Bernie organization there who may be able to provide some new information.” 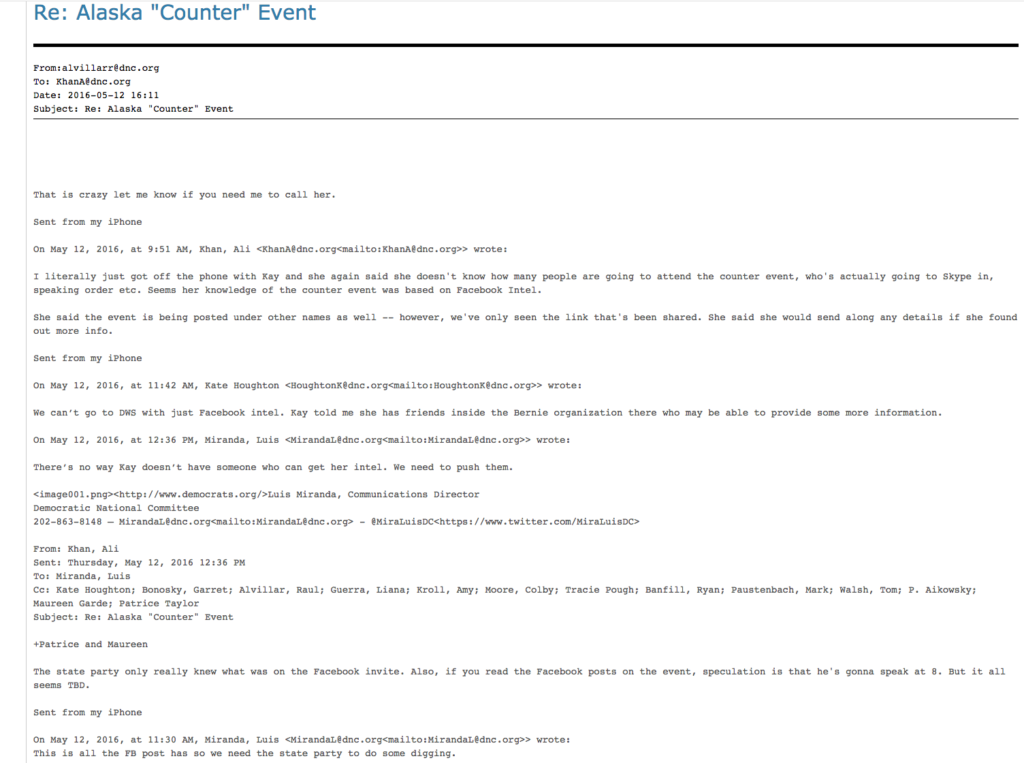 This email indicates that the Alaska Democratic Party had a mole operating with Bernie Sanders’ organization on behalf of the DNC. Image courtesy of Wikileaks.

This email demonstrates collusion between the DNC and the Alaska Democratic Party to shut out Sanders from within his own organization.

This Wikileaks Email (click to view original) shows Miranda with regional press teams within the organization and others regarding a protest, and the DNC sending in its own “bodies.” 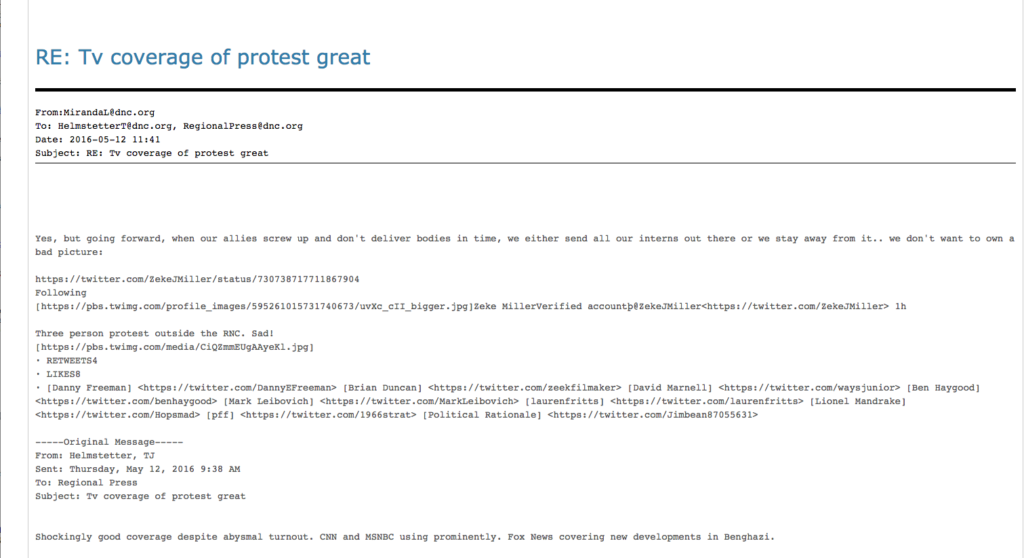 The DNC staff discusses sending in their own interns to fake protests. Image courtesy of Wikileaks.

“Yes,” he replied, “but going forward, when our allies screw up and don’t deliver bodies in time, we either send all our interns out there or we stay away from it…we don’t want to own a bad picture.”

InsideScene.com gives a hat tip (H/T) to Wikileaks for posting these emails on the Wikileaks site. Click here for the group’s site. .

Click here to read our previous article on this topic, regarding election fraud involving Wasserman Schultz and Clinton.