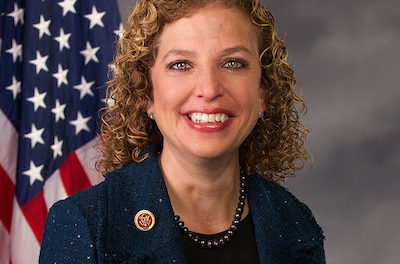 Debbie Wasserman Schultz who just resigned as DNC chair after she was evidenced as colluding with Hillary Rodham Clinton against Bernie Sanders for the Democratic Nomination. Public Domain Image.

The State of Florida has notoriously experienced issues at the polls and controversy. And this year is obviously no different with the resignation of Debbie Wasserman Schultz as chairwoman of the Democratic National Convention (DNC) today.

Though she has resigned, Congresswoman Wasserman Schultz (D-FL 23rd District) said she plans to still rally for Clinton in her home state, as well as taking the role of “honorary chair “ for Clinton’s campaign.

The DNC, however, has been colluding in election fraud attempts for over one year on behalf of Clinton nationwide, including creating issues with the voting and exit polls.

Inside Scene had previously tackled the issue of delegate rigging in South Florida after we received news tips from concerned readers about party insiders taking their place as delegates on the Republican end (click here to read our story).

Could there also be funny business in Florida on the Democratic side with the congresswoman’s sudden resignation? How about across the nation?

In Florida, Clinton reportedly took the primary from Sanders 64.4 percent to 33.3 percent (1,097,400 votes versus 566,603) with 141 versus 73 delegates won of the 214 in the Sunshine State. In spite of the issue with the Republicans, Donald Trump took the lead and the delegates from Ted Cruz, Marco Rubio (from Florida) and Jon Kasich.

According to a Politico article (click here to read) in Miami-Dade County where Wasserman Schultz hails from, the numbers were especially strong in Clinton’s favor, with 74.7 percent towards Clinton and 24.3 percent for Sanders 129,467 votes to 42,009. In neighboring Broward County, Clinton again snagged 72.5 percent of the votes (132,527) and Sanders 26.4 (48,330).

This article breaks down the delegates in Florida from both the Clinton and Sanders’ camps and it is evident to see the pull showing for Clinton in the Wasserman Schwartz counties and former counties.

According to a Los Angeles Times article, Florida is a “critical” state for this upcoming election. and it’s where Clinton introduced her running mate Tim Kaine.

The Times reports Florida as a “close battle” for power between Trump and Clinton.

In 2000, George W. Bush took his case to the Supreme Court after a close election against Democratic contender Al Gore. The state entered into manual recounting measures, which the Supreme Court ruled as “unconstitutional” for the protection given to some ballots and not others, and voted in favor of Bush.

During the primaries, Sanders news articles suggested that there were recounts and recanvasses requested including for Iowa, Kentucky and Missouri.

Click here for the many ways that Hillary Clinton and Debbie Wasserman Schultz may have participated in election fraud to garner the nomination. According to an article in Inquisitr, DNC paperwork surfaced from 2015 after a hacker named “Guccifer 2” uncovered a document that read, “Use specific hits to muddy the waters around ethics, transparency and campaign finance attacks on HRC [Hillary Rodham Clinton].

In the United States, according to the Federal Prosecution of Election Offenses Seventh Edition (click here)  it is noted, “election fraud may nevertheless occur during the primary season, as various party factions vie for power” and that “election crimes will typically coincide with other types of corruption.”

Sanders had also already told Wasserman Schultz that she would not be reappointed to the chair position for the DNC if he was elected to the Oval Office.